Back to the Future Trilogy: Bollards Could Have Been Marty McFly’s Worst Enemy

Bollards in Movies > Blog > Back to the Future Trilogy: Bollards Could Have Been Marty McFly’s Worst Enemy

Nick 0 Blog back to the future bollards

So, assuming you are at least familiar with the first Back to the Future film, you will know that Marty McFly is a teenager in 1985 who travels back in time to 1955 in a DeLorean time machine thanks to his much older, crazy scientist friend, Doc Brown—a totally normal relationship and situation.

While he is in 1955, Marty must repair history and make his future parents-to-be fall in love with each other—because Marty’s future mom, Lorraine, is in love with him and his purple underwear. Then Marty just needs to return to 1985 in the time machine. Simple.

However, what if retractable bollards ruined Marty’s efforts to return to 1985?

OK, lets take a step back. The story takes place in a nice town called Hill Valley. And all we really know about Hill Valley’s day-to-day operations is that there is a clock tower and they have mayoral elections. And there is Biff Tannen, who is always just being a general dick to the McFlys.

And since there is so much focus on the clock tower throughout the film—getting it back up and running in 1985; much of the action happening there in 1955—it’s safe to say that the town/city council would have made the efforts to implement security measures around the clock tower in order to prevent malicious vehicle attacks.

And since the clock tower is such a central hub to Hill Valley, it’s safe to assume they would have held community street fairs and possibly farmer’s markets in the area around the clock tower, creating large crowds of people in the streets. 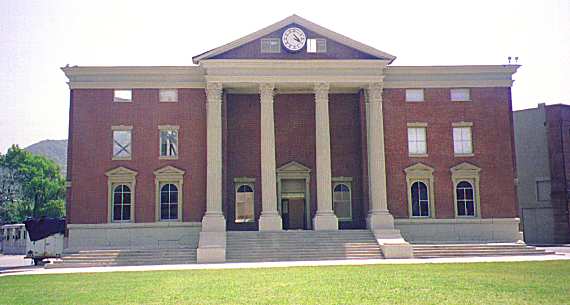 This type of information is not disclosed in the film because much of the focus is on Marty, Doc, and the McFlys. However, with miscreants such as Biff Tannen roaming the area at all times, it would’ve been a great move for Hill Valley to install retractable bollards to keep local residents safe during these public events. Here are retractable bollards in action.

Why is This Important?

Retractable bollards would obviously be kept lowered in the street during normal business operating hours and normal days of the week allowing for the proper passing of traffic through the streets, however, they could be raised in the event of a community affair to keep attendees safe.

Lets see how the planning could have taken shape: 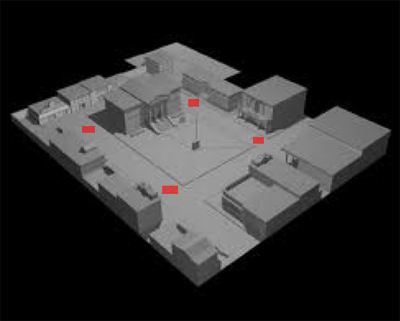 The red marks represent where retractable bollards would be installed in the street, therefore keeping residents and out-of-town visitors safe from stray or vicious vehicular attacks on the crowd during farmer’s markets or children’s art fairs held in the square.

With that being said, what impact could these retractable bollards have on Marty McFly and the future of the Back to the Future franchise?

It is very possible that retractable bollards can malfunction. And one of the final scenes of the film features Doc Brown on the clock tower attempting to plug in a cord so the lightning strike to the clock tower will provide Marty enough juice to propel the DeLorean time machine and Marty back to 1985.

But what if the retractable bollards in the street malfunctioned and rose out of the ground during this critical scene? It was a typical night, so Doc and Marty would normally not be worried about the bollards interfering with their plan, allowing for standard traffic passage near the clock tower—which they desperately needed.

And there would have been no one else in the area that could help because no one was outside to witness what was happening—aside from maybe the drunk homeless dude on the bus stop bench.

But you absolutely can never predict a situation in which retractable bollards will malfunction and automatically raise out of the ground on their own. Doc was on the clock tower messing around with the cord, Marty was trying to hit 88 MPH in the DeLorean. Lets see how the situation would have looked if the protective bollards had raised in the street as Marty approached the wire: 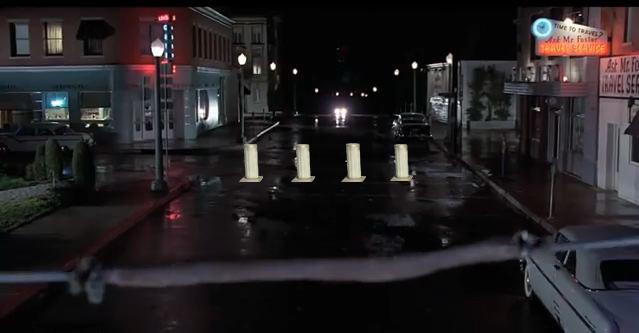 At that point, Marty was traveling at around 78 MPH. By the time of impact with those bollards, he probably would have been closer to 82 MPH and probably wouldn’t have had much of a chance of survival. Therefore, destroying the possibility of Michael J. Fox carrying the Back to the Future franchise into one the most popular trilogies of all time.

What if Marty died on impact and didn’t make it back to 1985? 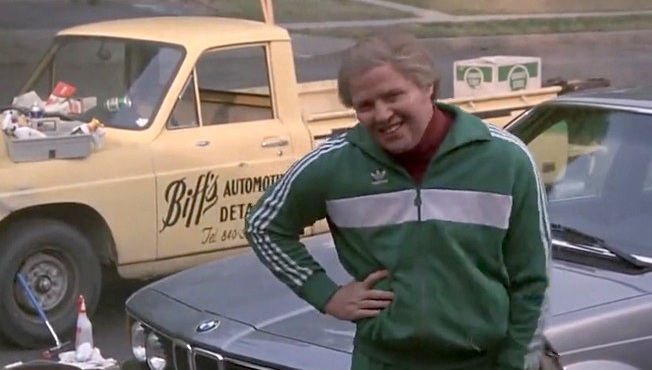 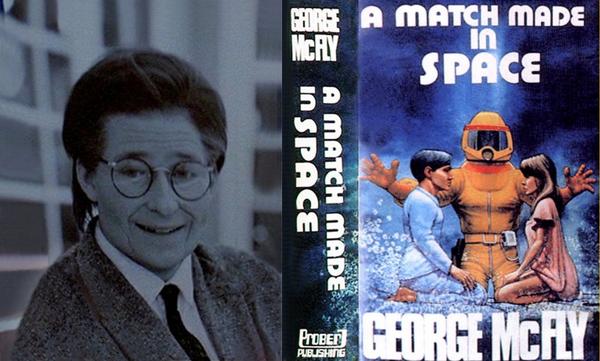 And more importantly, Back to the Future 2 could not have happened.

Back to the Future 2

Now this section doesn’t contain any conspiracy theories about bollards ruining the plot of Back to the Future 2. However, it will consider the overall state of the bollard industry within this universe.

Since it is set in the future—2015—and cars are flying around the sky, it seems like bollards protecting buildings from airborne vehicular attacks would be damn near impossible. For example, flying cars could run out of gas and plummet from the sky into the roofs of houses and businesses. It would be very difficult for bollards to prevent those types of accidents.

But what if the bollard industry evolved into traffic guidance? Sure, they could still protect buildings on the ground from attacks and reckless drivers. But what if they also guided drivers in the sky?

It’s pretty much impossible to paint traffic lane stripes into thin air. And there seems to already be some kind of airborne traffic guidance equipment in place in Back to the Future 2: 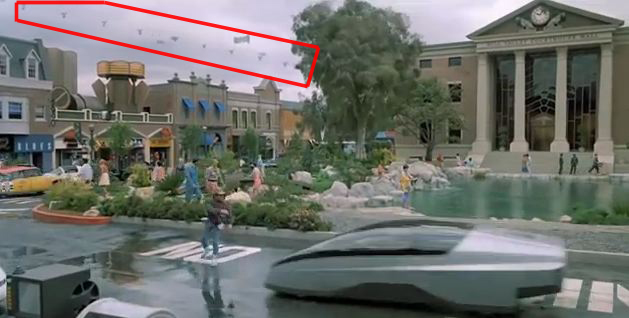 But it seems like the bollard industry could evolve with the automobile industry and take to the sky. They could create visual lanes to follow, making it much easier for drivers to navigate before they return safely to the ground: 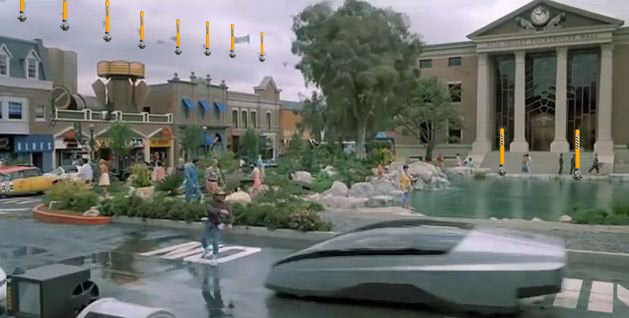 They could create some kind of scientific ultra-strong magnetic device implanted in the ground directly underneath to keep it solid and in place, even if the bollards are floating a couple hundred feet above the ground. The magnetic force would hold the skyward bollards solidly in place to prevent flying vehicular strikes to major floating buildings, such as a new clock tower: 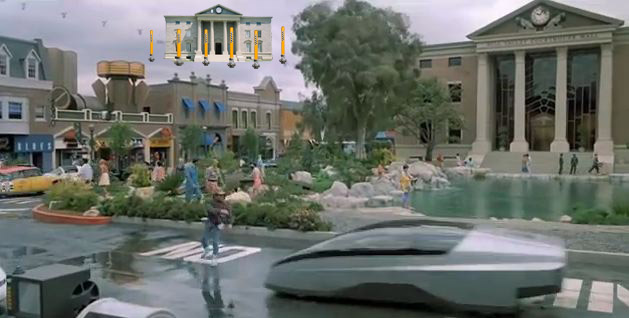 Now lets get away from the clock tower and on to the next film. Everyone’s favorite of the trilogy: Back to the Future 3.

Back to the Future 3

OK, so maybe you didn’t like Back to the Future 3. It’s usually the least loved film of the trilogy, unless maybe you are a huge fan of Mary Steenburgen’s body of work.

However, this film had the possibility to feature the first bollards in history? You may recall one of the final scenes where the train is pushing Marty in the DeLorean, trying to get it to 88 MPH before the end of the track so Marty can travel from 1885 back to 1985.

Hoverboard to the Rescue

Marty slips the hoverboard to Doc so he can rescue Clara from the impending doom both souls faced. And Doc for some reason looked like a wet cigar—or this guy from Indiana Jones and the Last Crusade—as he rescued Clara. I’m guessing it’s because special effects weren’t as advanced in 1990: 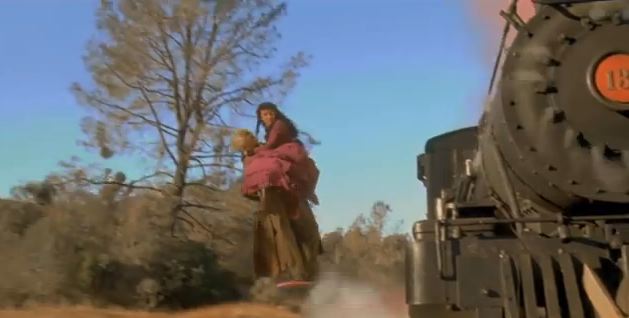 However, what if the settlers of the area decided to install bollards at the end of the train track instead of a crappy wooden sign? 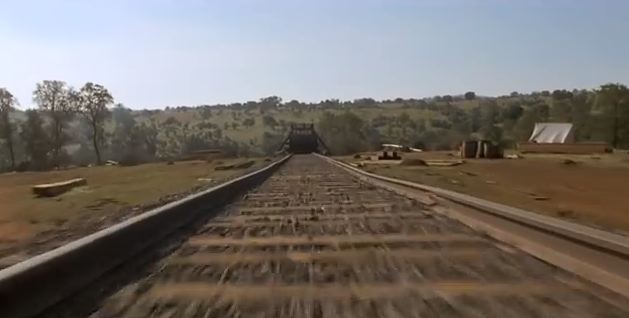 The situation may have looked like this for Marty: 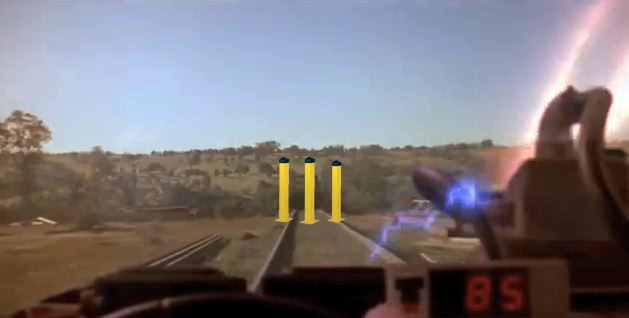 If bollards had been installed at the end of the track, over time—especially in this primitive era—it may have saved several trains and valuable necessary commodities from flying off the cliff. Well, the speeding trains and human lives would most likely be destroyed, but coal and other cargo may have been saved by simply spilling on the sides of the track before the rest of the train flew off the edge with passengers and the railroad engineers.

Unfortunately—in this case—Marty would have been pushed into the bollards at approximately 86 – 87 MPH, just before the required 88 MPH in order to travel back to 1985, therefore destroying any chance of Marty getting back to his family and normal life—while Doc and Clara get away scott free on the hoverboard.

All that really happened once Marty and the DeLorean got back in time was the time machine getting destroyed by a train anyways: 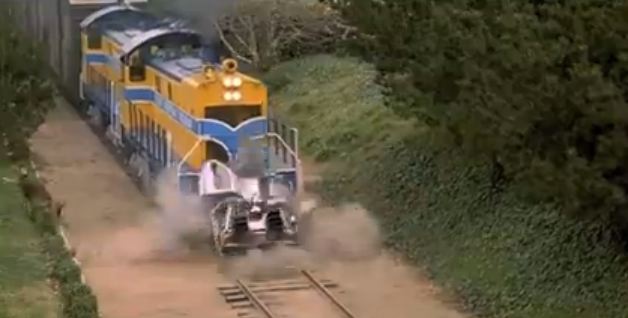 It would have been so much more refreshing if the DeLorean was ultimately destroyed by bollards in the 1800s at the end of the track, even if Marty was collateral damage. No one liked this film anyways.

Even a time traveling train didn’t save the ending to this one. 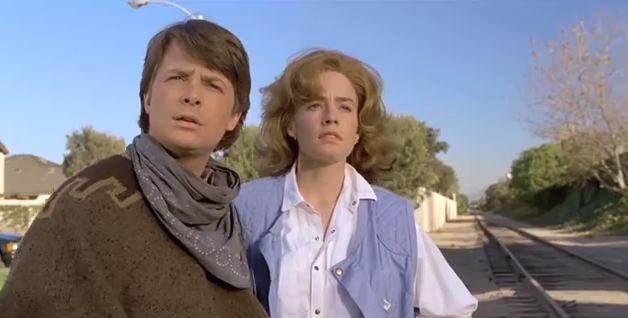 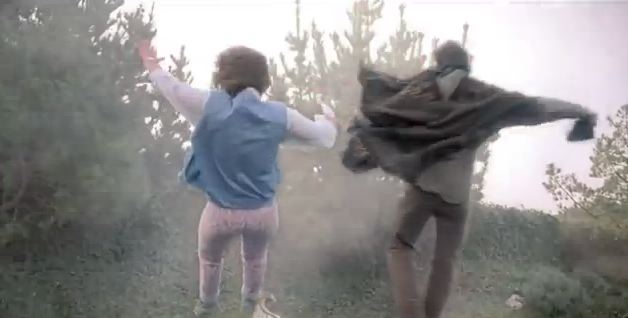 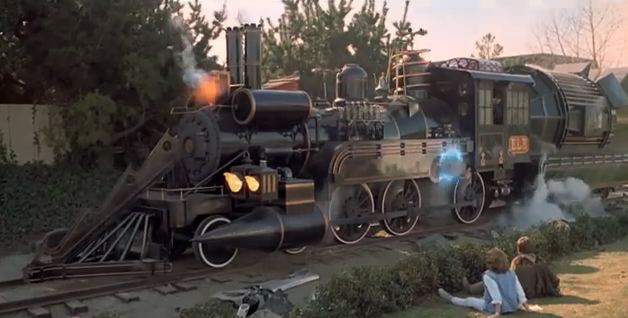 Now learn what a bollard is.