The Dark Knight: What Traffic Posts Could Have Done to Save (or Ruin) Gotham

Bollards in Movies > Blog > The Dark Knight: What Traffic Posts Could Have Done to Save (or Ruin) Gotham

If you haven’t seen The Dark Knight by now, you most likely never will, or you weren’t alive in 2008, which means you likely won’t be reading this. Either way, you will see a few key plot points ruined here (literally), so I suggest you catch up before reading on.

If you have seen this film before, I’m sure you remember the cast, which included Christian Bale as the underacted Bruce Wayne, who liked to sound like he had stage-4 throat cancer whenever he was dressed as Batman, Heath Ledger as the unforgettable pencil-trick-loving Joker and Aaron Eckhart as two-faced “Gotham savior” Harvey Dent.

Who could forget the story, which was about Batman trying to foil the consistently elusive Joker as he played the Gotham City Police Department like a finely tuned Gibson guitar, all while Harvey Dent questioned his morality and the worth of the city. It’s a story about corruption, insanity, good vs. evil and all that is in between those two ends of the spectrum. But there’s one thing that could’ve really screwed everything up for our heroes and villains:

Yep, those things could’ve changed this film for the worse. And here’s how.

The film starts off with a heist, of course, which is being committed by a team of robbers in clown masks. Can we guess who they are affiliated with already?

The group goes through the motions of stealthily breaking into and robbing a bank to get to this big-ass vault: 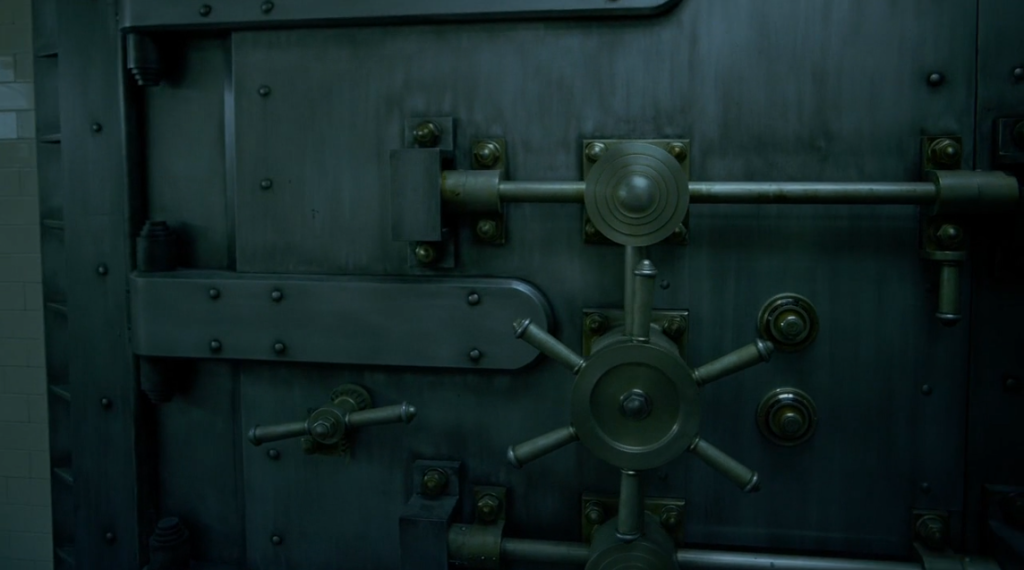 That doesn’t look cliché at all.

One by one, they pick each other off like the carefree psychopaths they are in order to decrease the amount of shares when they divvy up the score. We eventually wind up with two guys left alive on screen. The last two have a little chat after neutralizing the rogue shotgun-wielding bank manager, without finishing him off.

One of the robbers holds a gun to the other and says, “I’m betting the Joker told you to kill me as soon as we loaded the cash.” 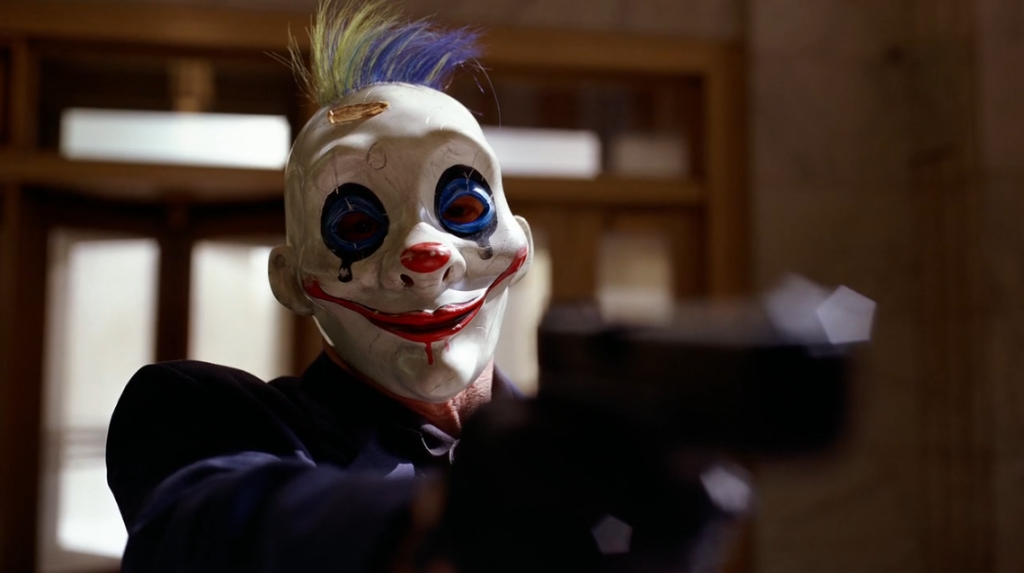 The other guy responds, “No, no, no, no. I killed the bus driver,” while moving sideways like he has a slight curvature of the spine. 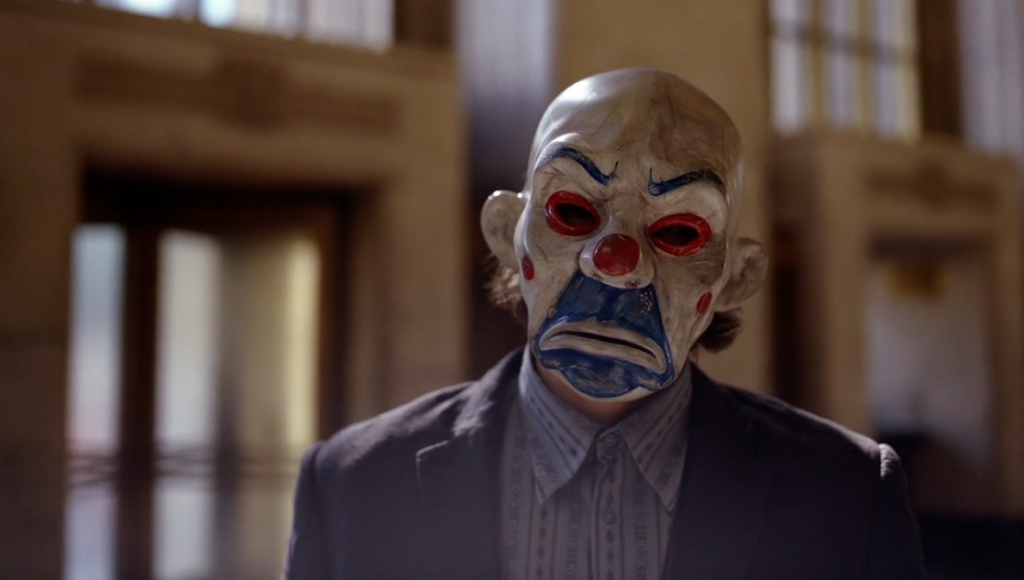 And then this happens: 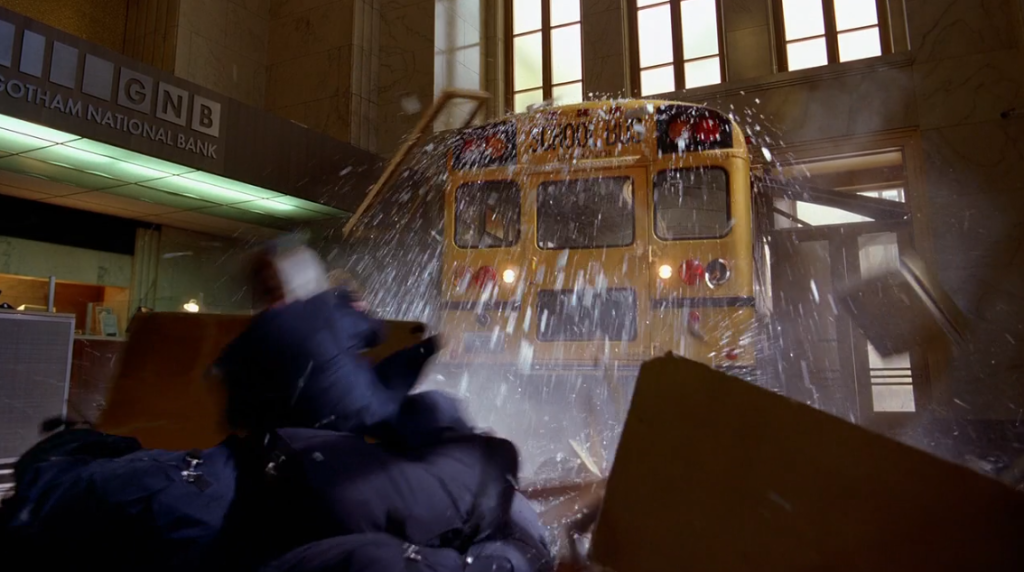 The crash kills the robber who was threatening only a moment before, and the driver is revealed to be another robber, unsurprisingly. 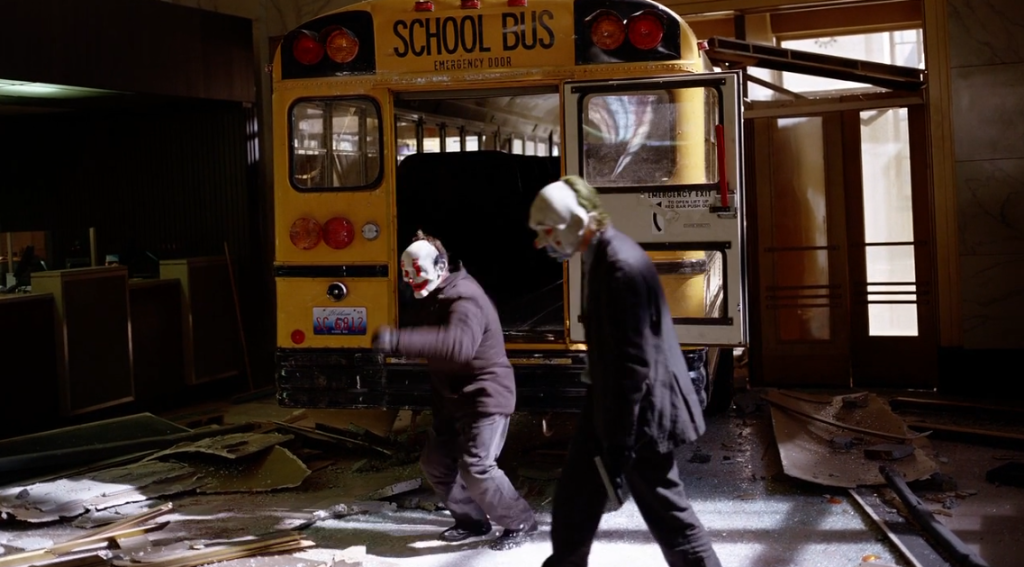 The driver asks what happened to all the others as they load the duffel bags of cash into the bus, which results in his death at the hands of the guy who clearly cares the least about people. 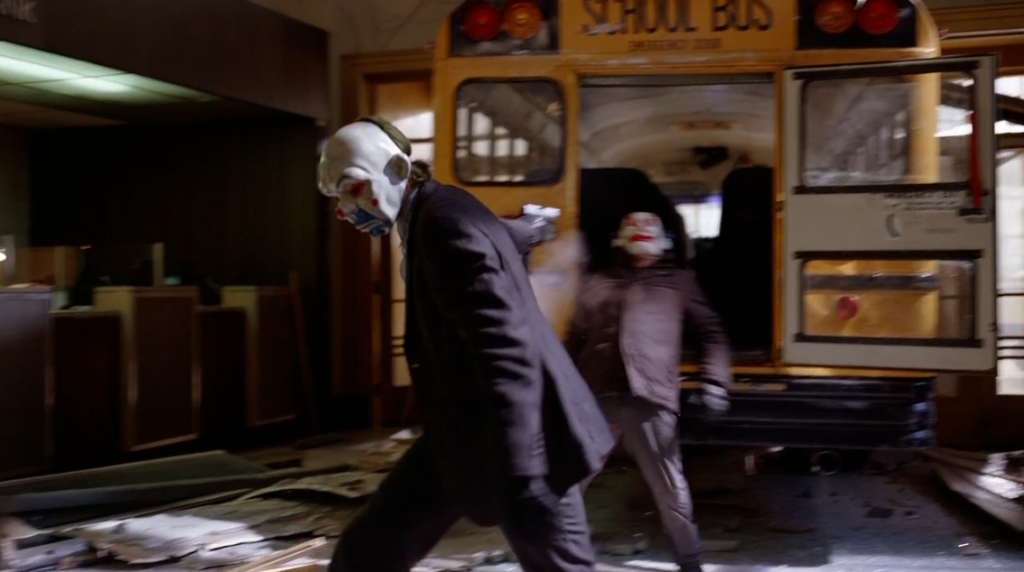 Shortest appearance in this film. We won’t forget you.

After this, the last remaining man walks up to the bank manager lying on the floor and reveals himself to be the Joker, 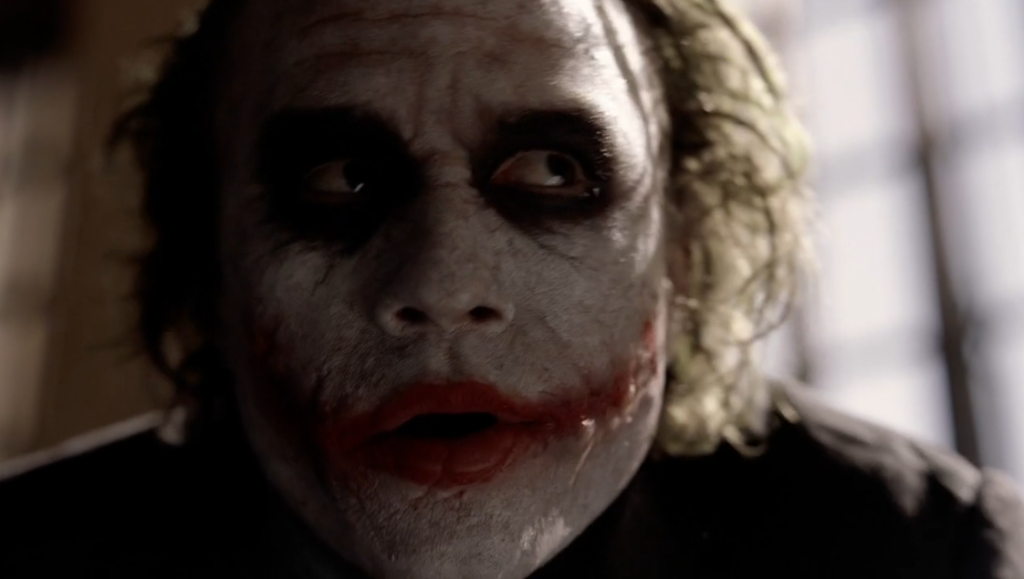 and sticks a grenade in his mouth (which he could just pull out at any time with his uninjured arms) before attaching the pin to the bus with a string and driving away, 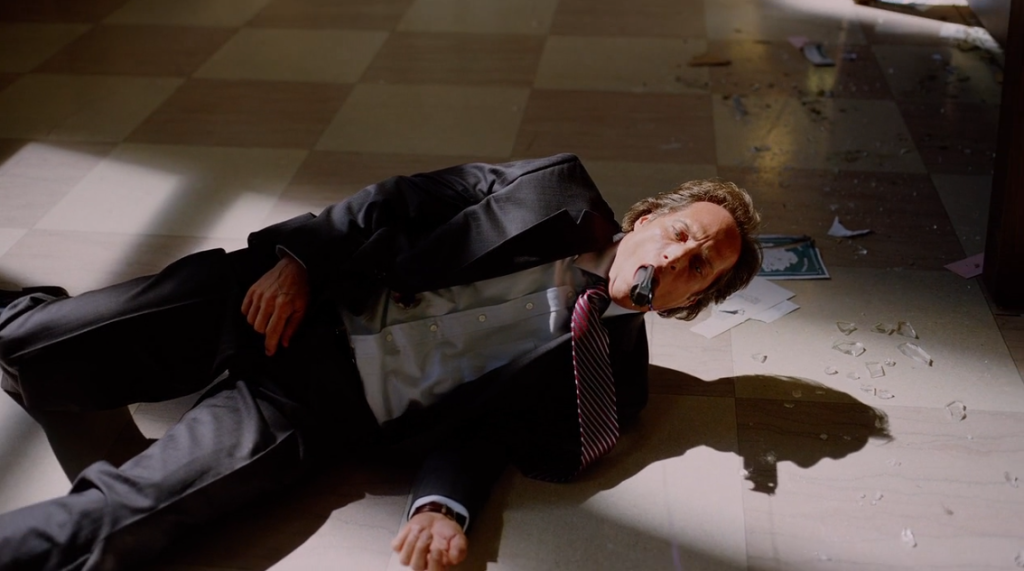 only to reveal that it’s filled with smoke once the pin is pulled. 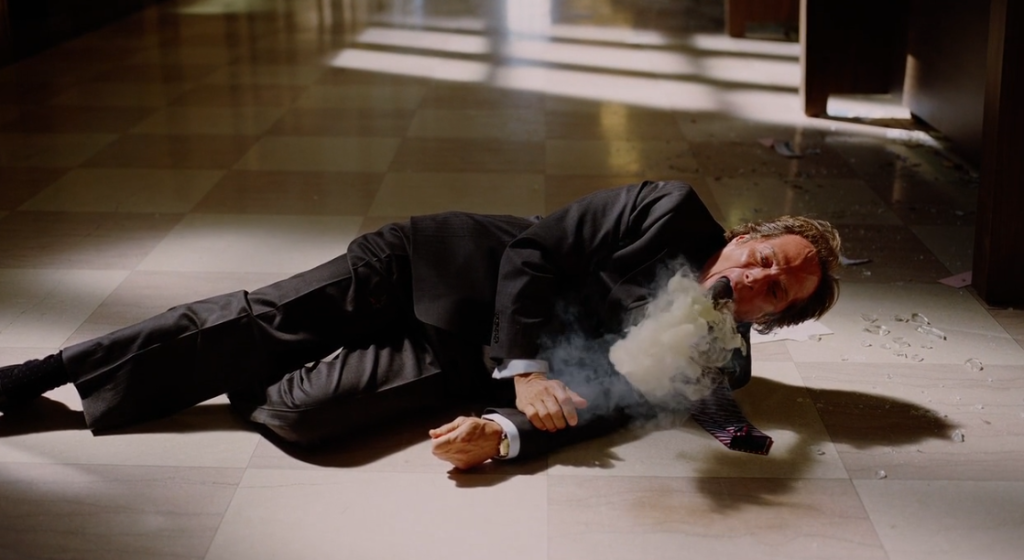 This is then followed by the Joker coolly driving away from the scene just as the cops arrive there.

That magnificent opening (or petty, horrible crime, depending on the perspective) could’ve been averted with the help of some simple devices: 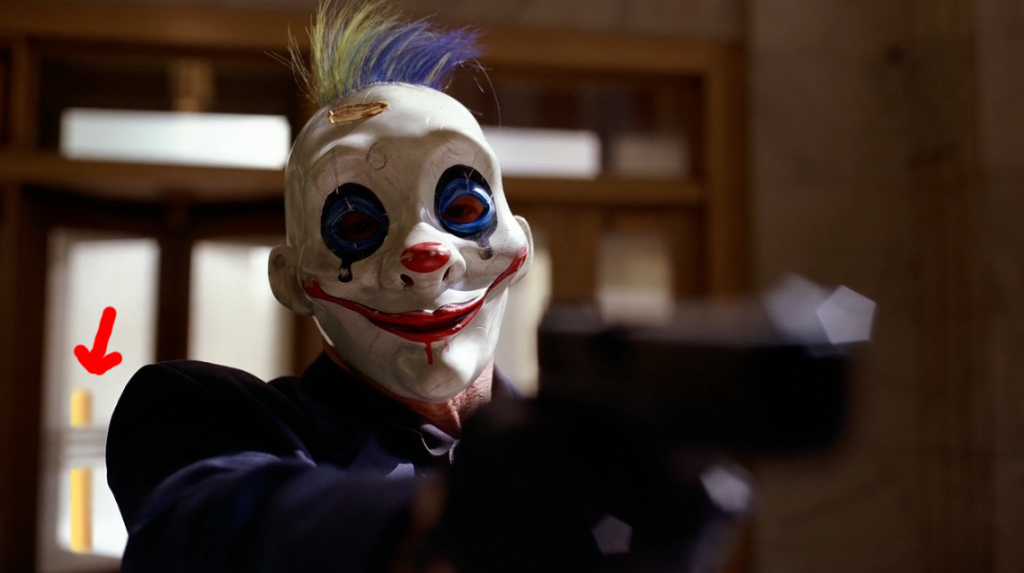 Because of that, the bus wouldn’t have been able to drive through the door, the Joker probably would’ve been contacted about this presumably unforeseen circumstance by the driver upon realization, and subsequently he most likely would’ve been one pissed off clown, missing that one-minute window of opportunity to escape. Could bollards have saved Gotham and ruined an awesome opening scene in this situation? Possibly, I think.

Could they have served a beneficial purpose throughout other Joker escapades, though? Let’s find out.

Later in the film, we get our first big chase sequence involving the GPD and the Joker as Harvey Dent is transported in a heavily reinforced van for his own protection, as Gotham’s perceived White Knight. He looks fairly comfortable at the start, 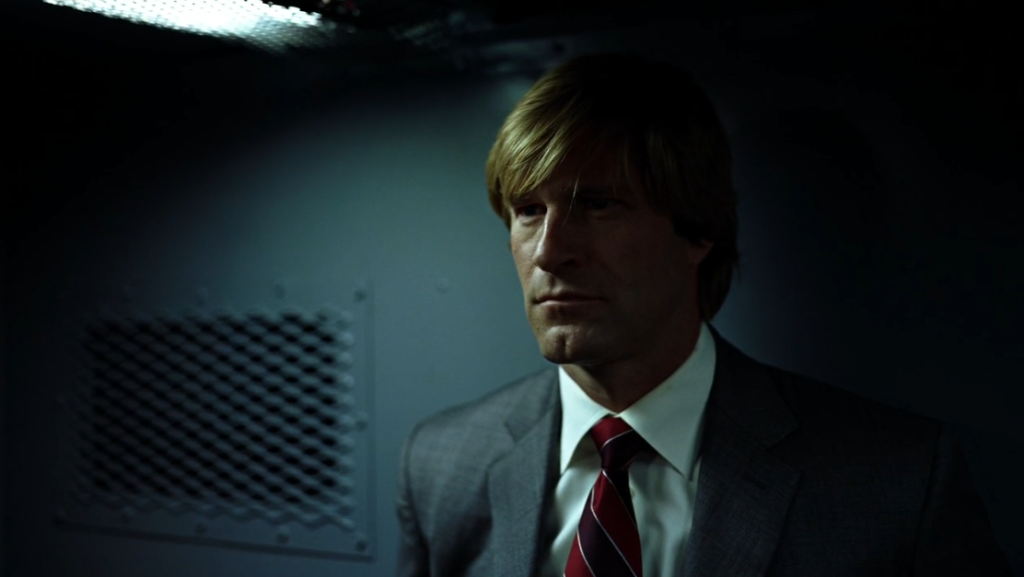 but that sense of security is quickly extinguished after the police escort is detoured by a burning truck, and this happens: 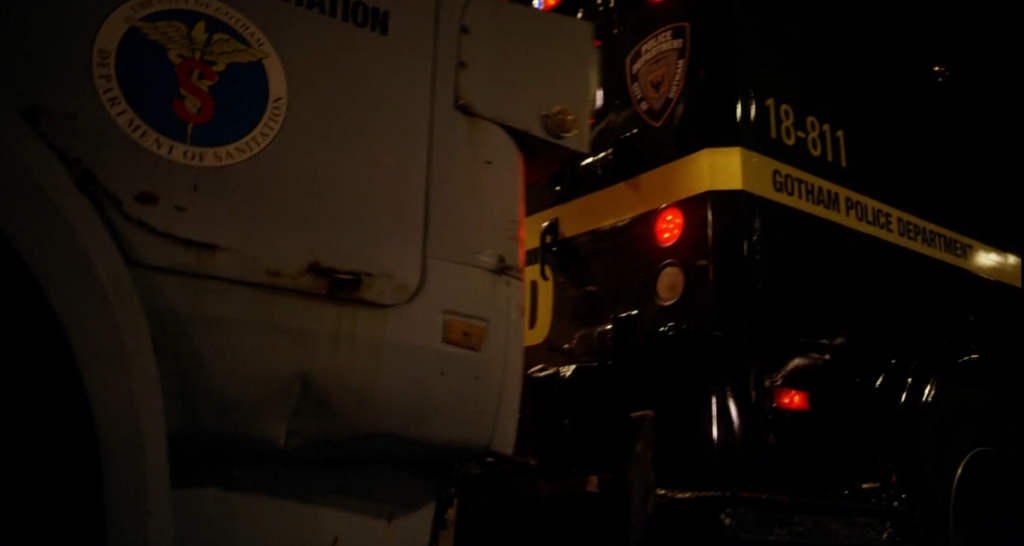 The criminally commandeered garbage truck keeps the van from stopping, while the Joker and his crew pull up in a cleverly vandalized semi, 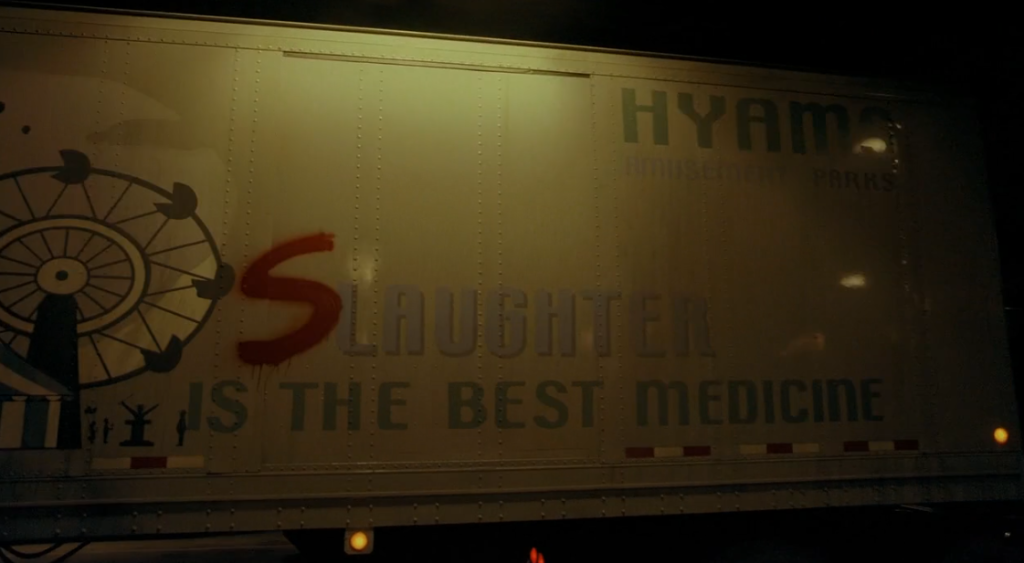 and open fire on the side of the van. 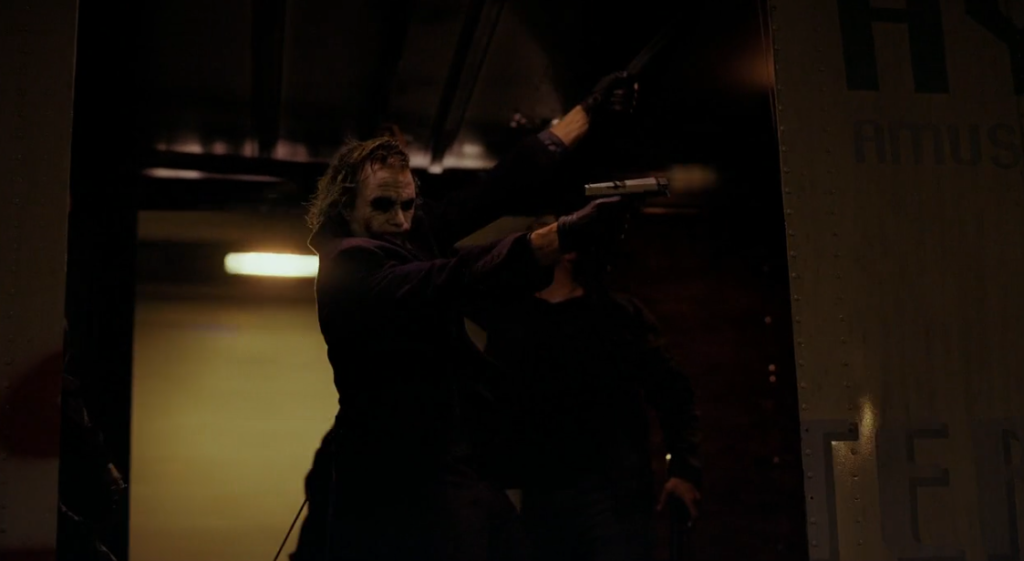 Now at this point, on this particular stretch of underground road, traffic posts wouldn’t logically be installed in a place that could really stop them, considering they aren’t near an exit for a while, but one unlucky SWAT van overcome by the semi could’ve avoided this earlier accident 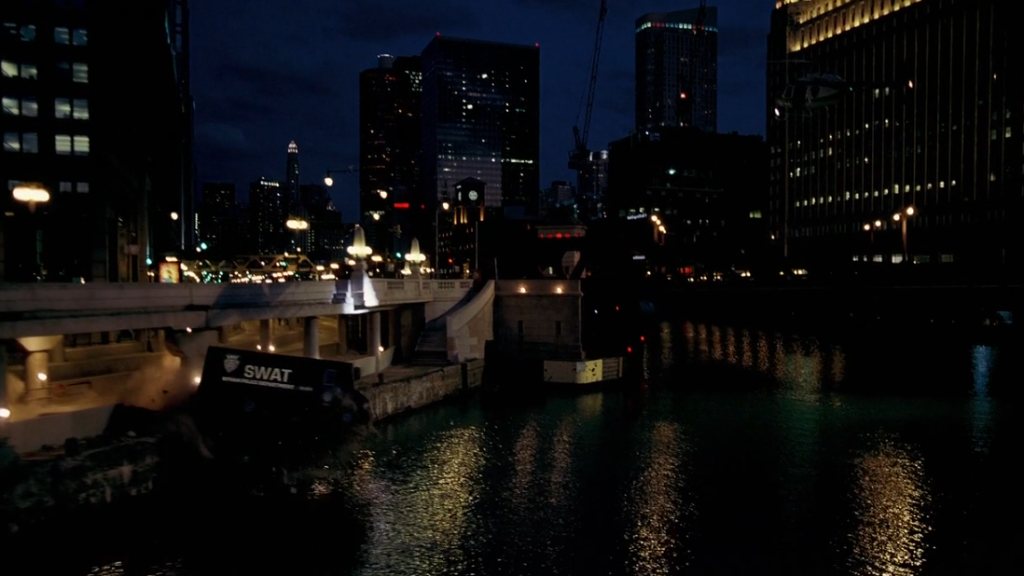 had bollards been installed alongside the far railing as reinforcement to prevent that kind of thing from happening.

That’s a vehicle full of at least five officers right there, although with any luck they all made it out of there alive regardless, lucky bastards.

But where else could traffic bollards have served a purpose in this dismal world?

Soon after this chase gets heated, Batman arrives in his Batmobile, breaking out of it with a badass Batcycle to continue chasing down the semi and Dent’s SWAT van. While doing so, he decides to take a little detour of his own not quite on the road to confuse a thug. 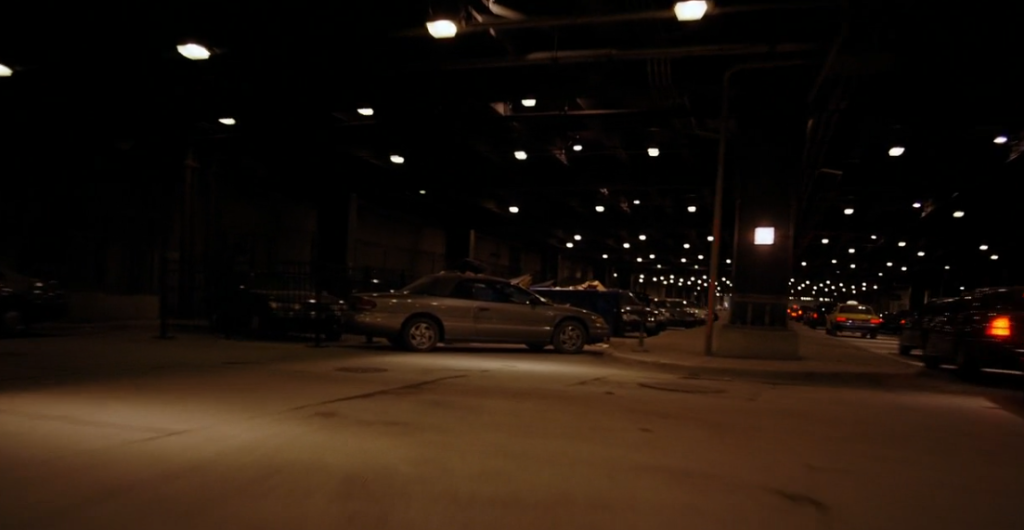 He uses the bike’s front guns to demolish some objects in the way, like stupid cars, 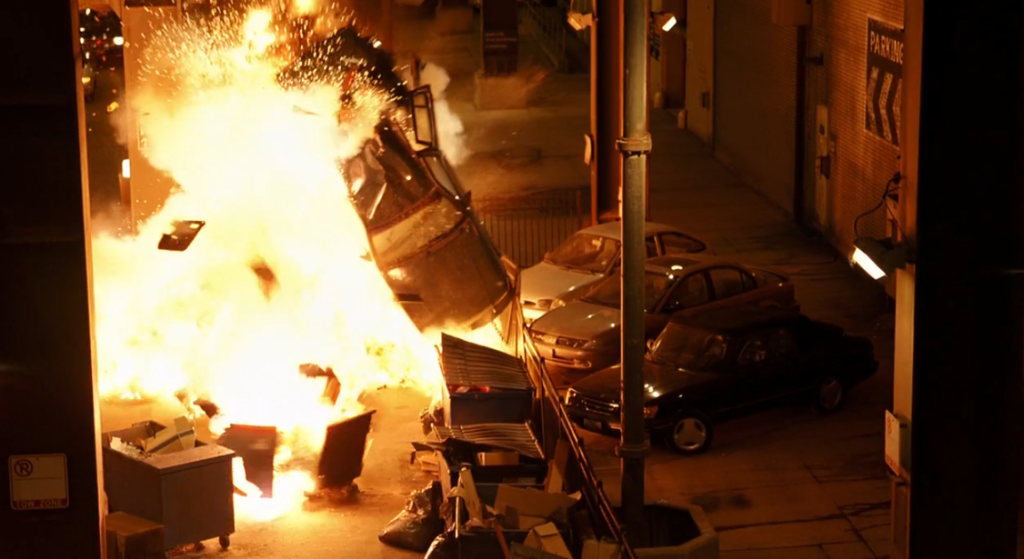 and comes out of the flames okay. 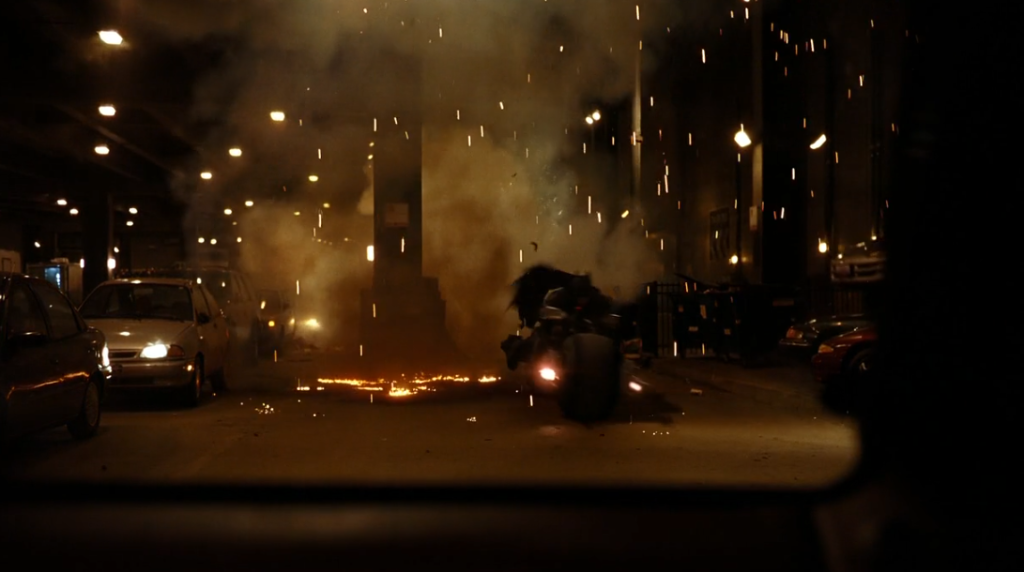 But what if a bollard was there that he happened to miss through all the smoke and flames? 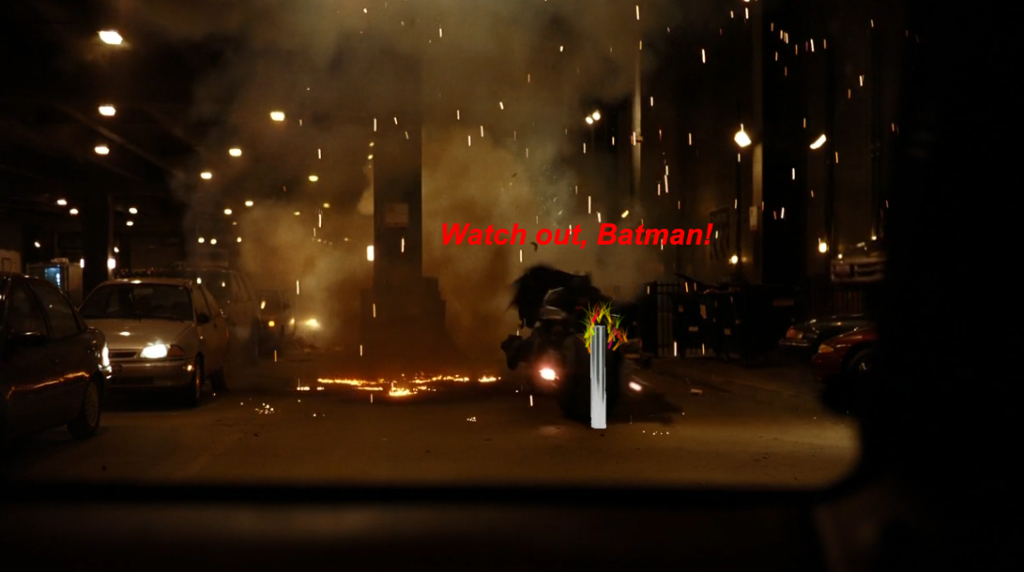 Batman might have been alright, but he also could’ve flipped over, crippling both himself and his bike, or simply required enough time to reorient himself, get back on the bike and continue his pursuit to allow the Joker to get away with his devious plan. You never know.

And what if ram-raiding prevention posts were here, in front of the entrance of this building he was about to drive through? 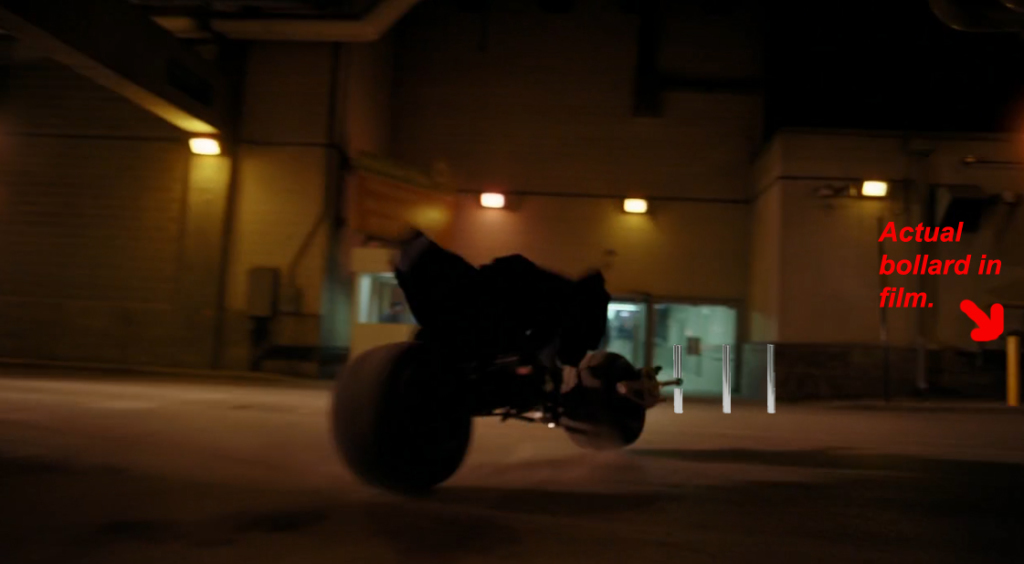 Or what about here, in front of this street light? 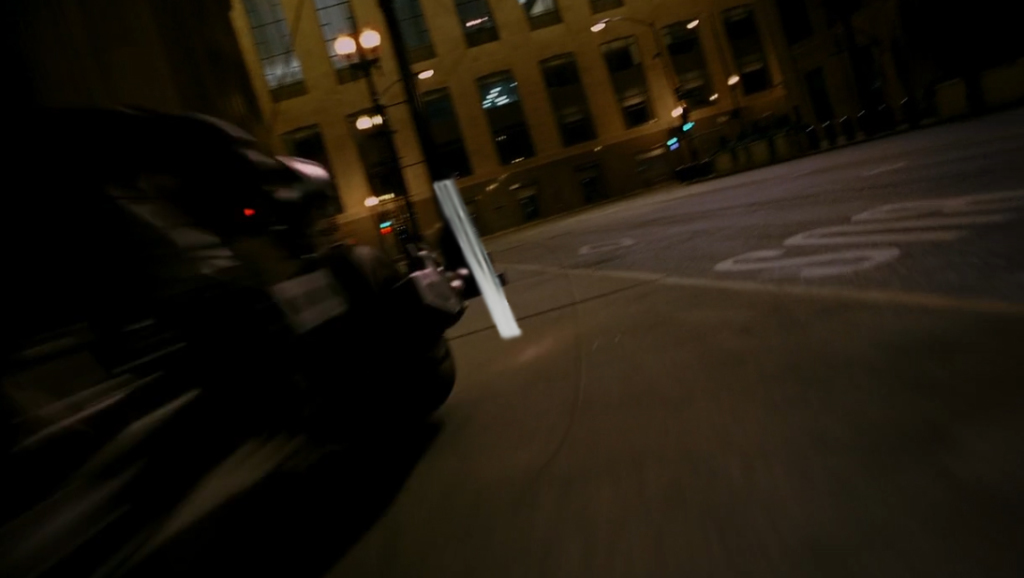 Or here, in front of the next street light? 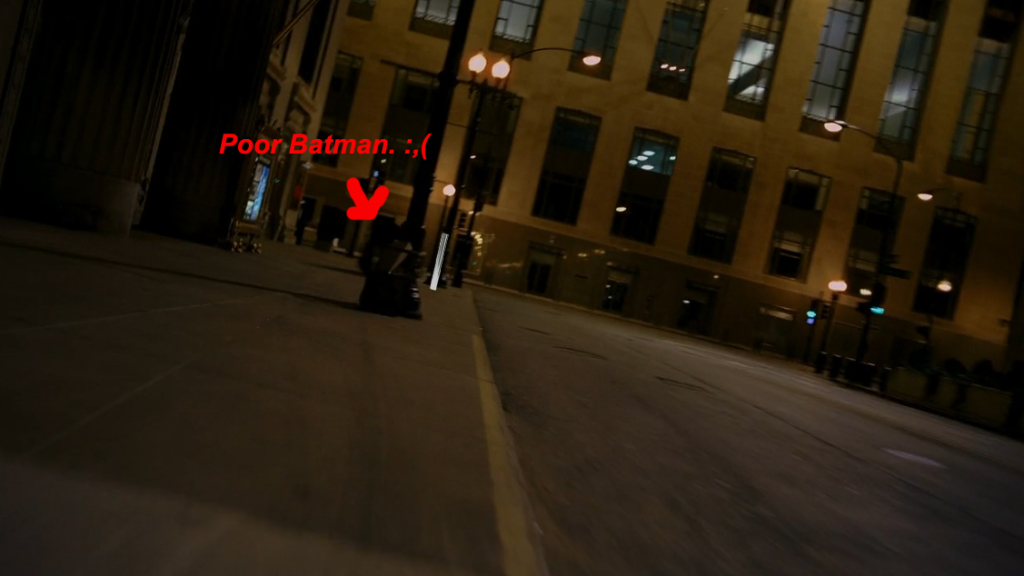 I guess he actually made it around these ones: 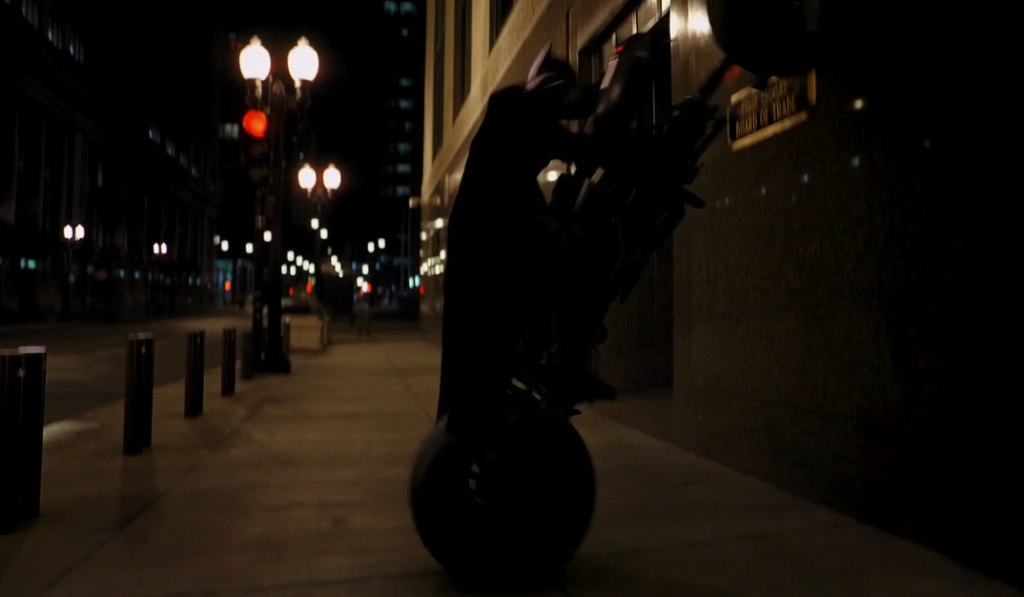 More importantly, what if the Joker had somehow gained control over some hypothetical rising bollards here as Batman is about to squash him? 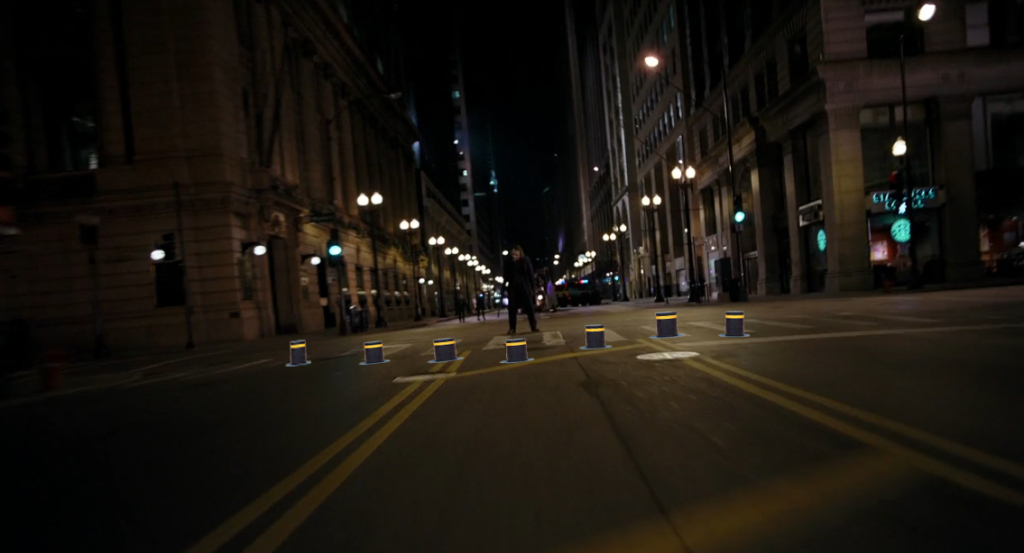 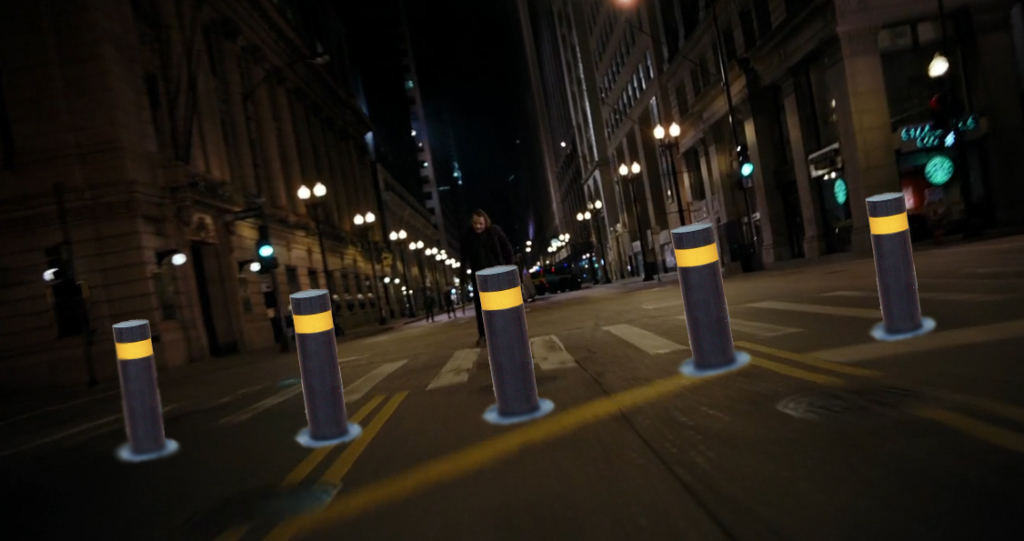 Granted, he doesn’t hit him anyway, 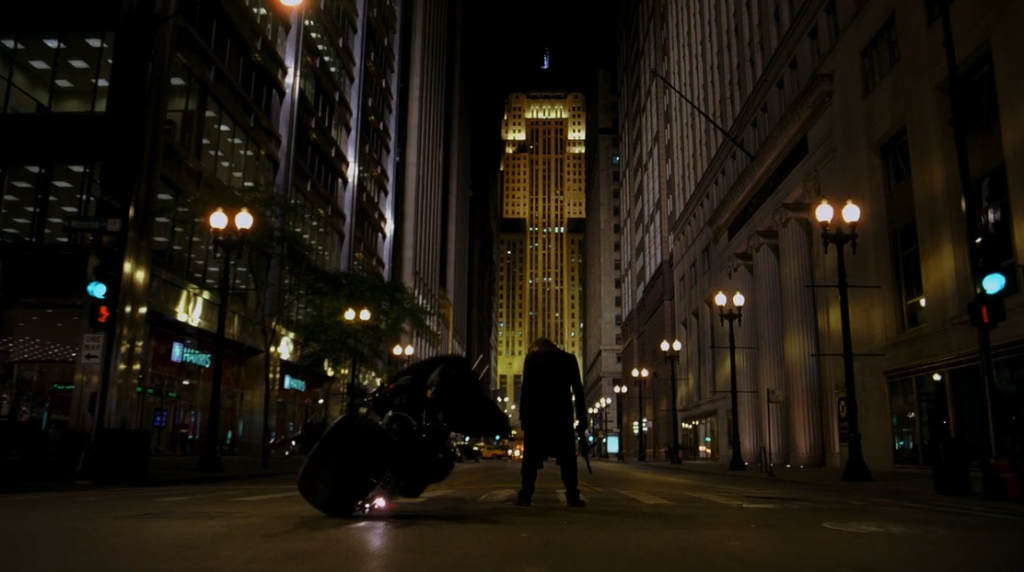 but he wouldn’t have had to take so long to make the decision to stop himself before crashing into the befallen semi as a result. 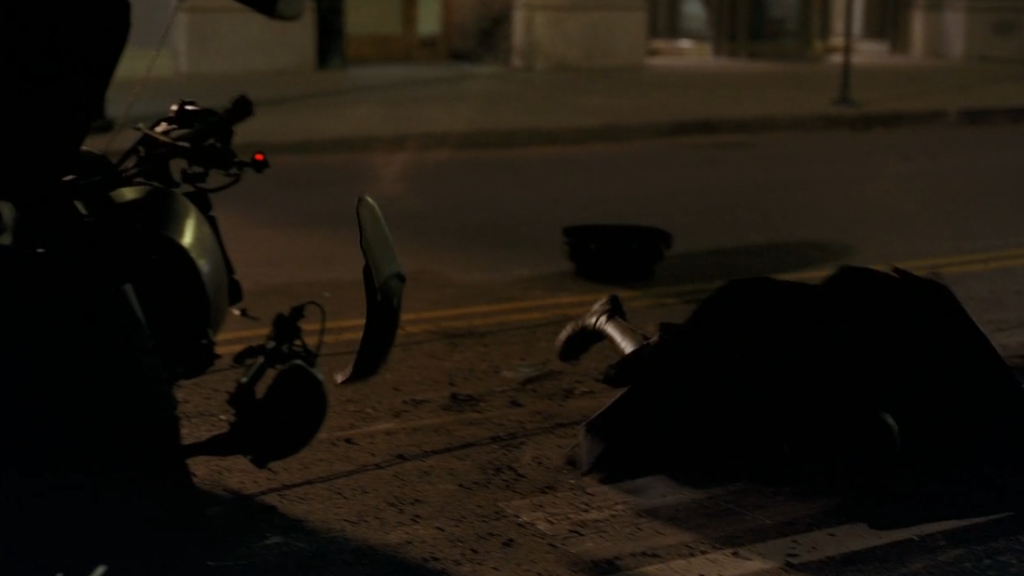 Either way, it’s good ol’ Commissioner Gordon in a SWAT uniform who actually comes to the rescue in this scene, 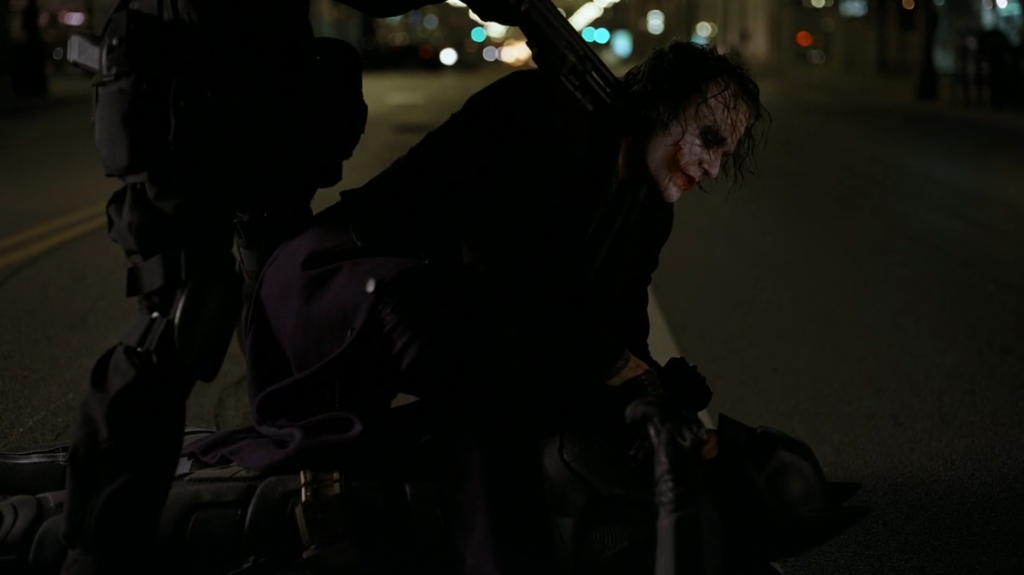 but Batman could have been seriously messed up by some bollards all on their own, which would mean that in this case they would have actually doomed Gotham. Shame on you, bollards, shame on you.

However, even with bollards planted in place to screw him over, we know that Bruce Wayne is clever enough to get himself out of any situation and force good to prevail over moral entropy, stopping the Joker once and for all.

At the same time, there’s no denying that we would most likely still see this face no matter what:

I don’t know what traffic posts could have done to really prevent that.