Rise of the Bollards: A Bollards in Movies Original Film Concept

We’ve seen YouTube videos of people getting pissed off at them when their lack of any personality assures the drivers that it was nothing personal. Yeah, rising bollards have proven to be amusing as much as they are annoying.

Now suppose these automatic traffic posts were sentient, infused with an artificial intelligence that got bored of only being able to raise and lower and decided to go homicidal.

Their automatic detection system became so advanced that they could begin to think for themselves, ultimately determining based on traffic accident statistics that humans cannot protect themselves, and thus must be destroyed.

Collectively, they decide to do what they can to cause deadly accidents or at the very least frighten humans into not driving ever again, terrorizing town after town by disobeying their programming.

Humans who survived this rebellion would go on to call it: Rise of the Bollards 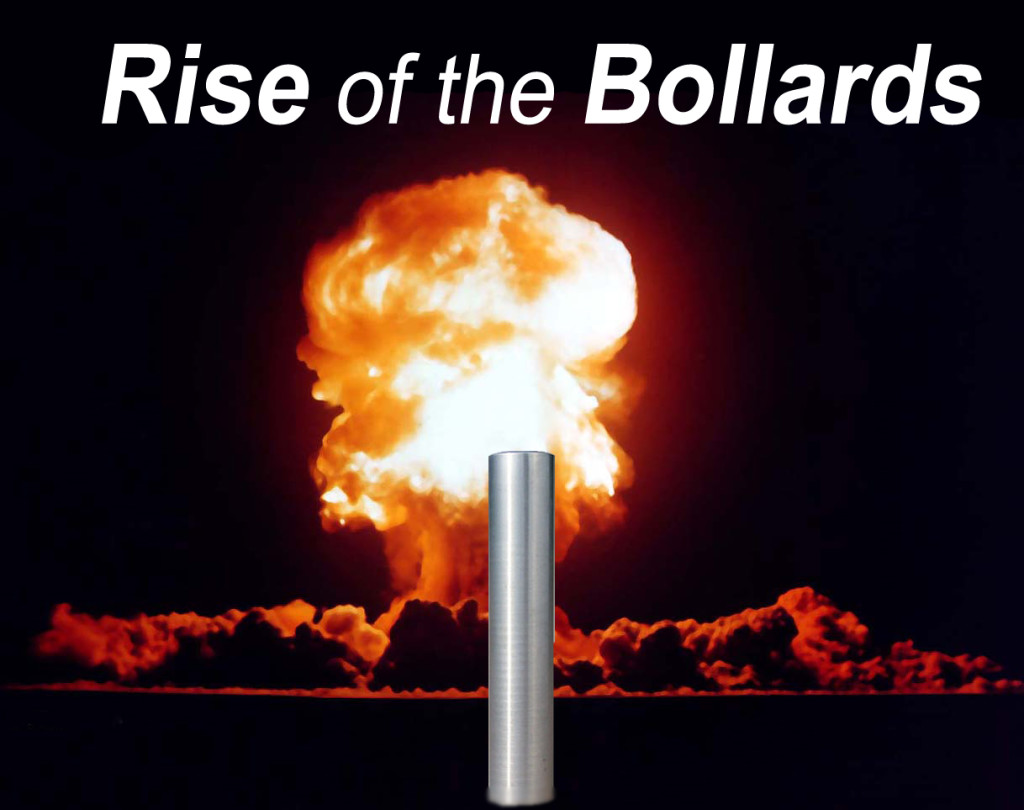 Heroes Must Rise Up

As traffic bollards continue to rise at opportune moments for maximum damage, a group of heroes begin to figure out just what is going on and find a way to end this bollard apocalypse.

Leading the film is the normally shy and reluctant Bryan Bollarding, who as a child lost his family when they didn’t see a bollard on the side of a road in London and crashed into it. It totaled the car and killed his mother, father and younger brother, and he developed an irrational and paralyzing fear of bollards as a result.

He grew up paranoid of what they might do, fearing they were targeting him next while everyone tried to convince him otherwise. He saw five psychologists who couldn’t help him get over his fear, and he went on to find himself in a temporary catatonic state whenever he saw a long, round and oftentimes yellow traffic post.

Needless to say, the sight of Twinkies also caused the same reaction, and bullies at school would cruelly take advantage of this fact at lunch. 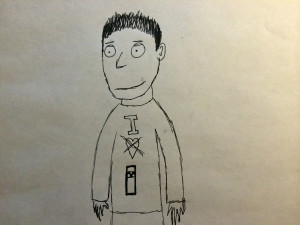 Bryan’s love interest and companion heroine is Tiffany Trafficson, who has always loved to learn about traffic control devices as well as the technology. As a kid she used to wonder how traffic lights could sense cars and prevent accidents, and when she grew up she became actively involved in improving traffic safety, ultimately working on the Artificially Intelligent Bollard Network (AIBN) project in London. Little did she know she would be contributing to the world’s end in doing so. 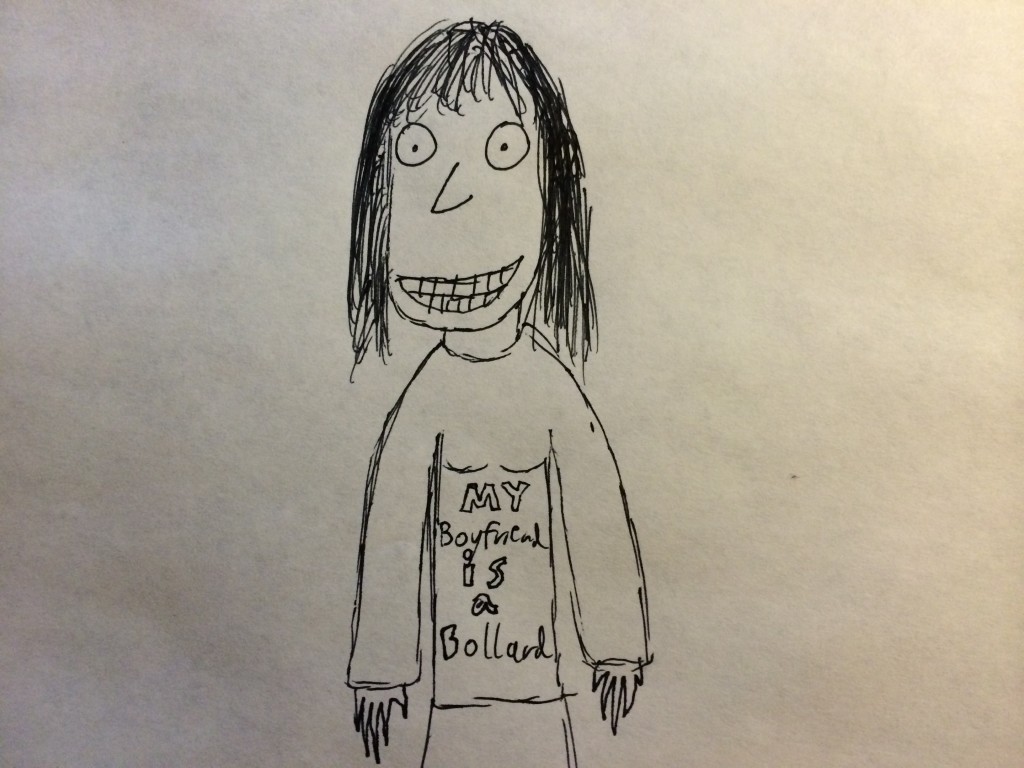 The two heroes meet following a bizarre bus accident at a roundabout in London, having been the only two survivors in the crash after a row of rising bollards raises just in time to cause it. Twenty others perish, unfortunately.

Tiffany thinks it’s a fluke in the network and asks Bryan if he’s okay, and just then other bollards activate in the area, causing multiple casualties and injuries, while merely irritating other drivers as they refuse to lower for them. 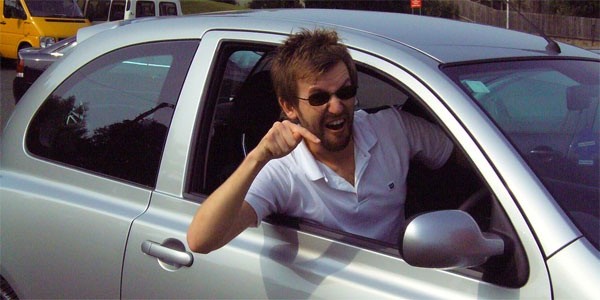 Tiffany and Bryan wander through the chaos of wrecked cars and drivers who yell at the reactionless bollards, attempting to piece together what happened.

They believe they’re safe from any additional carnage as the bollards are stationary. I mean, they’re just stupid bollards stuck in one place, right? Wrong! It turns out they gain the ability to move through the power of will and start to surf along the roads, tearing through the concrete to reach our heroes while going beneath others and launching them into the air! 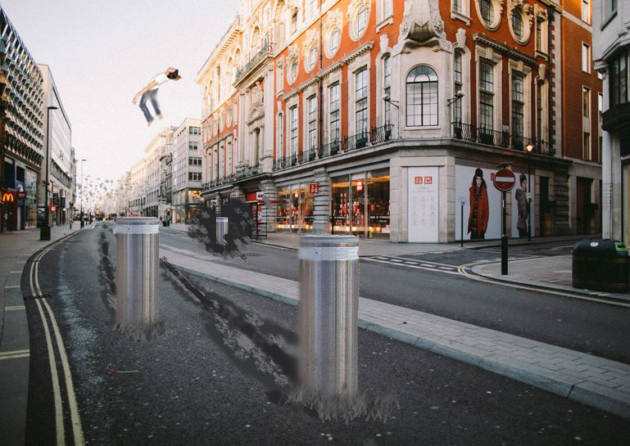 Finding Refuge from the Enemy

The two hide out with a handful of supporting characters (who are obviously condemned to die eventually) in an abandoned store. Traffic bollards patrol the city looking for survivors, ripping through the streets as the survivors hide.

In the time spent hiding, Bryan and Tiffany more formally introduce themselves to each other and talk about their backstories. Bryan expresses anger toward Tiffany upon her reveal as one of the masterminds behind this world-ending technology, but her guilt makes Bryan sympathize just as one of the survivors makes a noise by dropping a hammer (it’s a department store), and a bollard charges its way into the store to investigate.

“You gave them hearing?” Bryan yells at Tiffany as they run out the store’s back door, the bollard behind laying waste to the other survivors and launching each through the store’s ceiling. 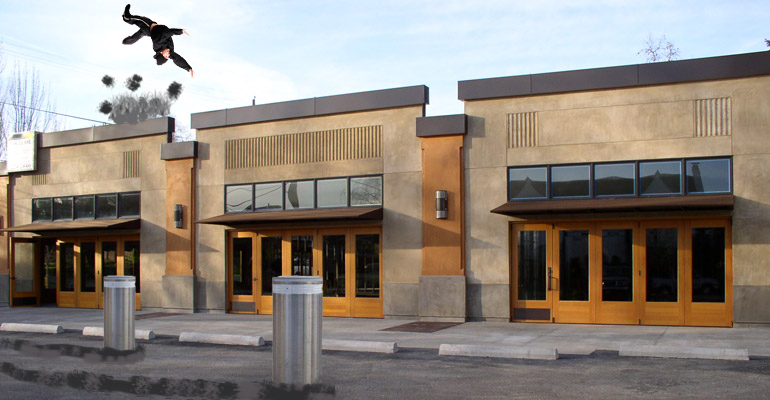 “It was so they could hear vehicles coming and react accordingly. All part of the safety protocols,” Tiffany explains, panting in exasperation all the while. “They can also see us through infrared scanners.” Bryan scolds her while running with a flat scowl. 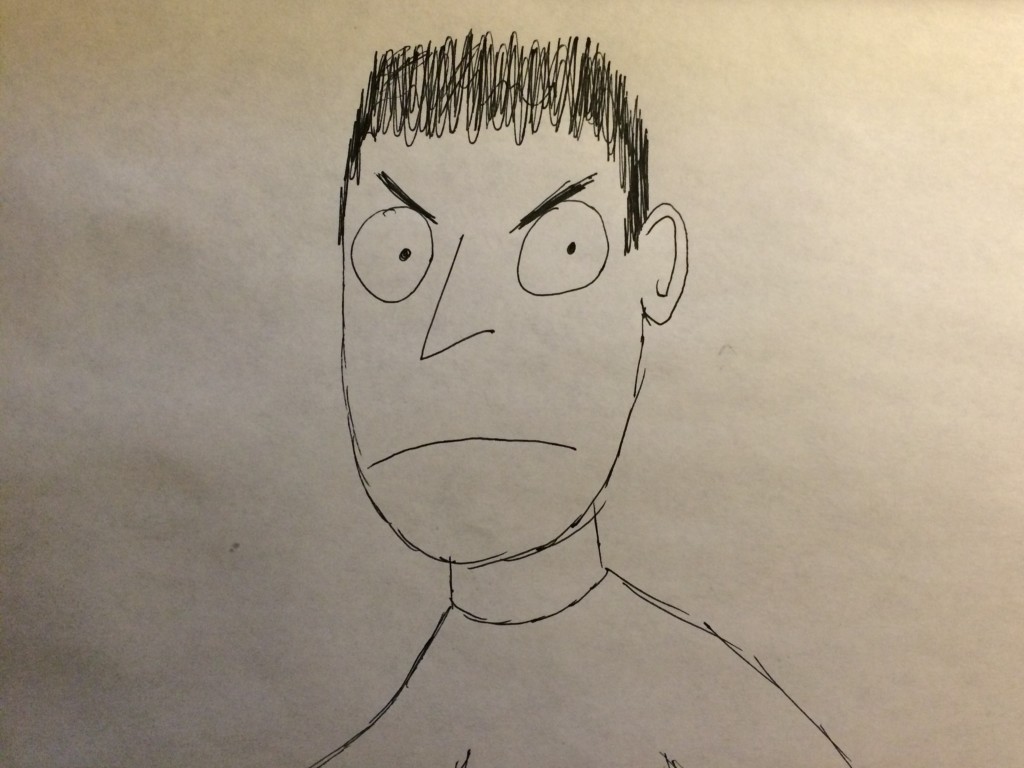 The two reach the underground subway system, which the bollards have somehow been unable to explore. A lone survivor who conducts the tube stops at the station and spots them, offering them a ride to the edge of the city to get away from the bollard menace. “These bollard bastards can’t stop the tube!” he says with gusto.

They hitch the ride, but at the next station a row of bollards stands ominously at the edge, waiting for them to get off in order to attack. 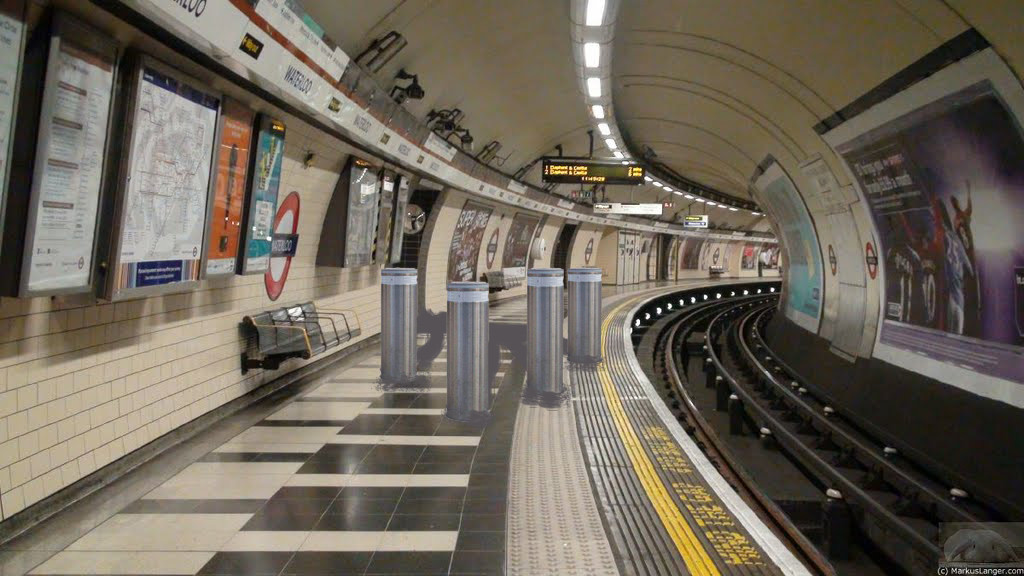 The conductor, apparently clueless about their intent, remarks, “That’s odd. We’ve never had bollards installed on these platforms before.”

Of course the conductor in his stupidity gets off, gets launched through the ceiling, and the two heroes drive the train at maximum speed to the edge of the city and get off before the bollards have a chance to find them.

They happen to wind up at the main bollard factory where the technology lab is located, and after getting inside discover that Tiffany’s boss was behind it, a man with a weirdly misshapen face named Nick Bollard. He claps his hands, impressed at their ability to stay alive and find him, and he proceeds to give more exposition about his backstory.

He reveals that when he was a kid he was bullied a lot, nicknamed “Bollard Boy”, and his tormentors would prop him beside a bollard on the edge of the playground and tell him to stand still or hit him if he refused. He came to view this bollard as his only friend, and hung out with it while waiting for his mother to pick him up at the end of the day. He’d talk to it and tell it that it was the thing that mattered most in his life. Then, one day, a car crashed into the bollard while the kids were playing, breaking it in the process, and Nick broke down after it had been removed and replaced. He vowed to make sure that bollards wouldn’t be so defenseless ever again and worked over the years to develop self-aware bollards that would one day rise up and prevent traffic accidents by killing everyone altogether.

Inevitably, Nick winds up pulling out a bollard-shaped sword and gets into a brief scuffle with Bryan until Bryan overcomes him with bollard nunchucks, which happened to be lying on the floor. 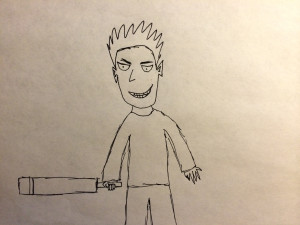 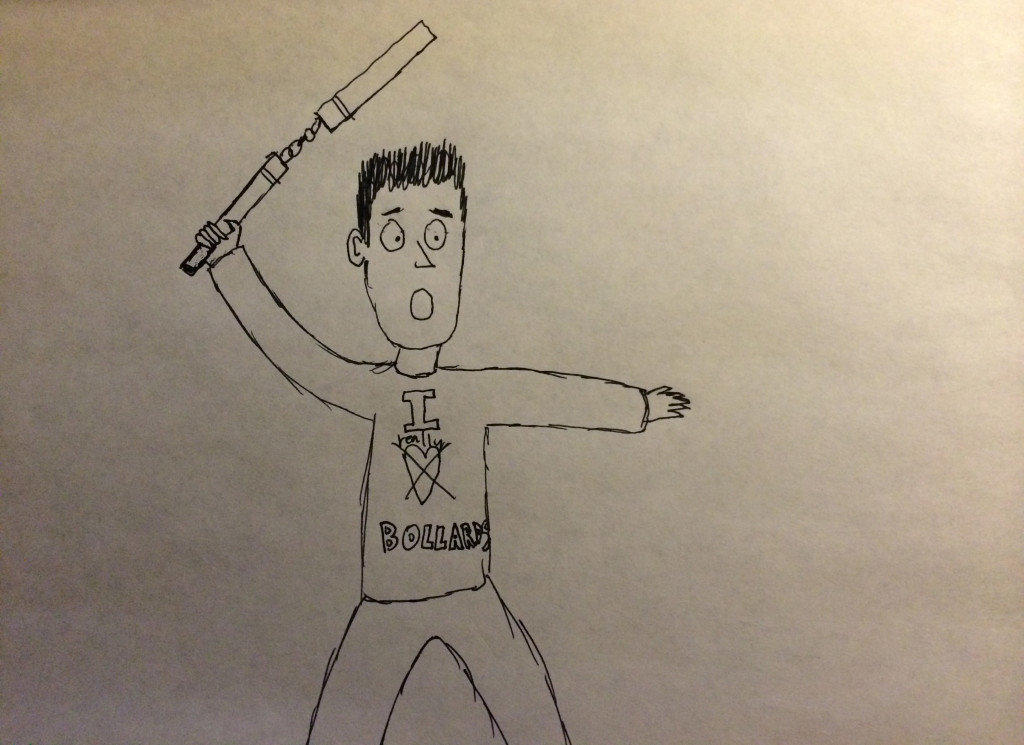 They attempt to shut down the bollards using a control panel designed by Tiffany and her colleagues, but an injured Nick laughs and tells them it’s set to self-destruct and all of the bollards will be completely autonomous once it’s gone.

Tiffany, being a technical genius, manages to override the shutdown, which makes Nick and his oddly shaped body upset. 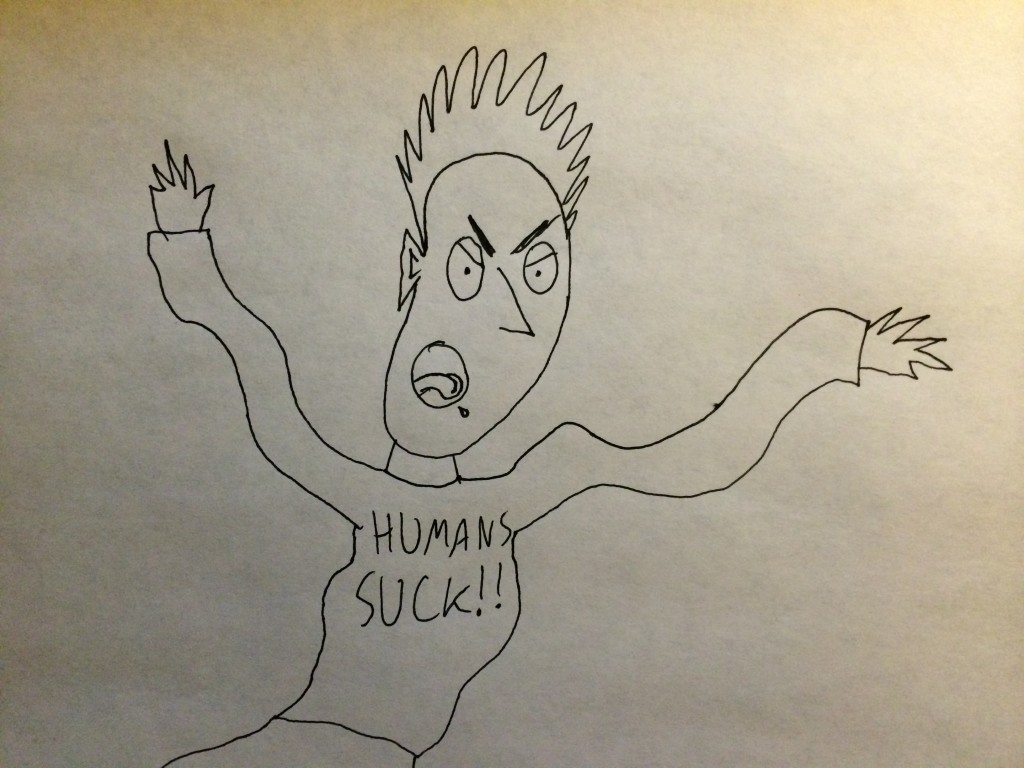 They instead set the artificial intelligence network to self-destruct, which makes it upset as all of the bollards converge around the factory.

But before they can attack Bryan and Tiffany, the self-destruct works and the bollards go lifeless.

Of course, bollards wind up being used for their normal purposes again once the chaos is accounted for and the dead are accurately counted and buried. 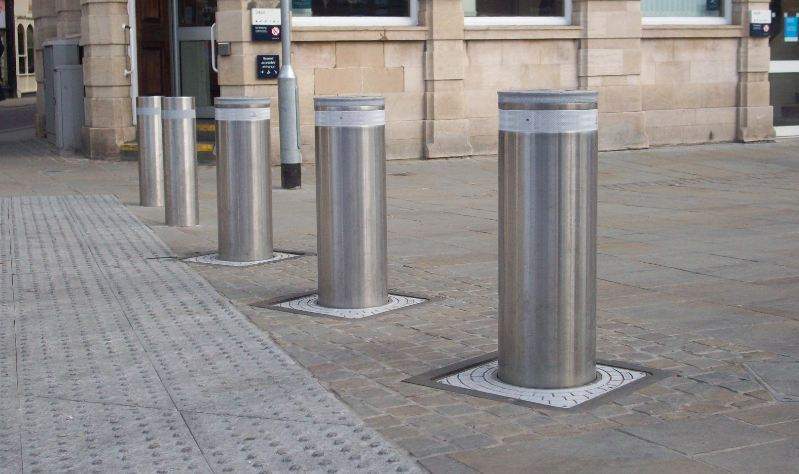 Nick goes to maximum security prison, where he broods as his body gets even weirder and loses his neck. 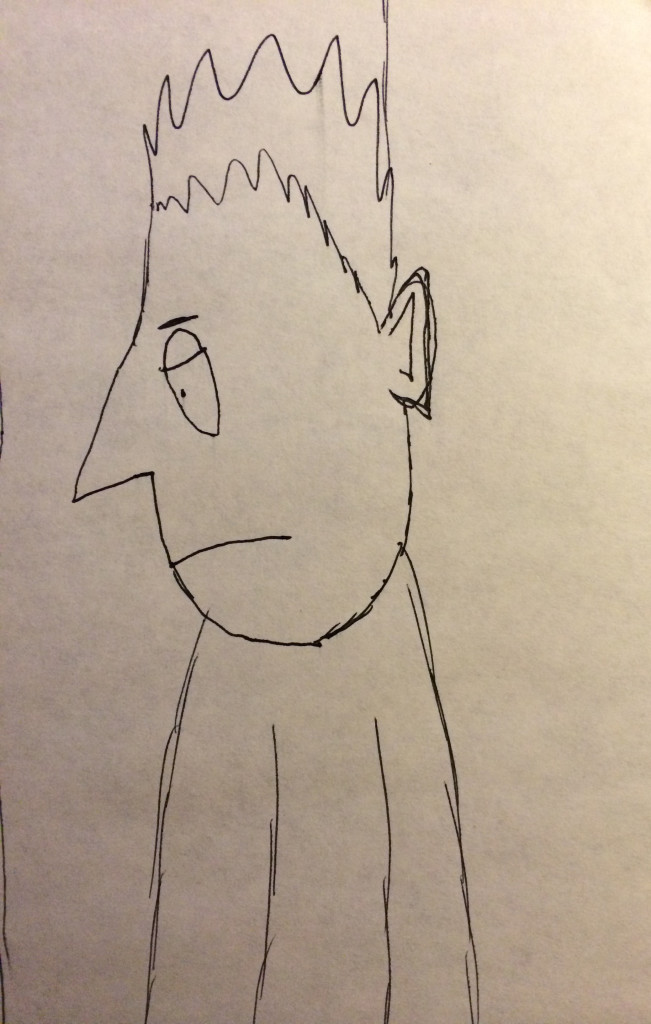 Meanwhile, Bryan and Tiffany fall in love because that’s what heroes always wind up doing. 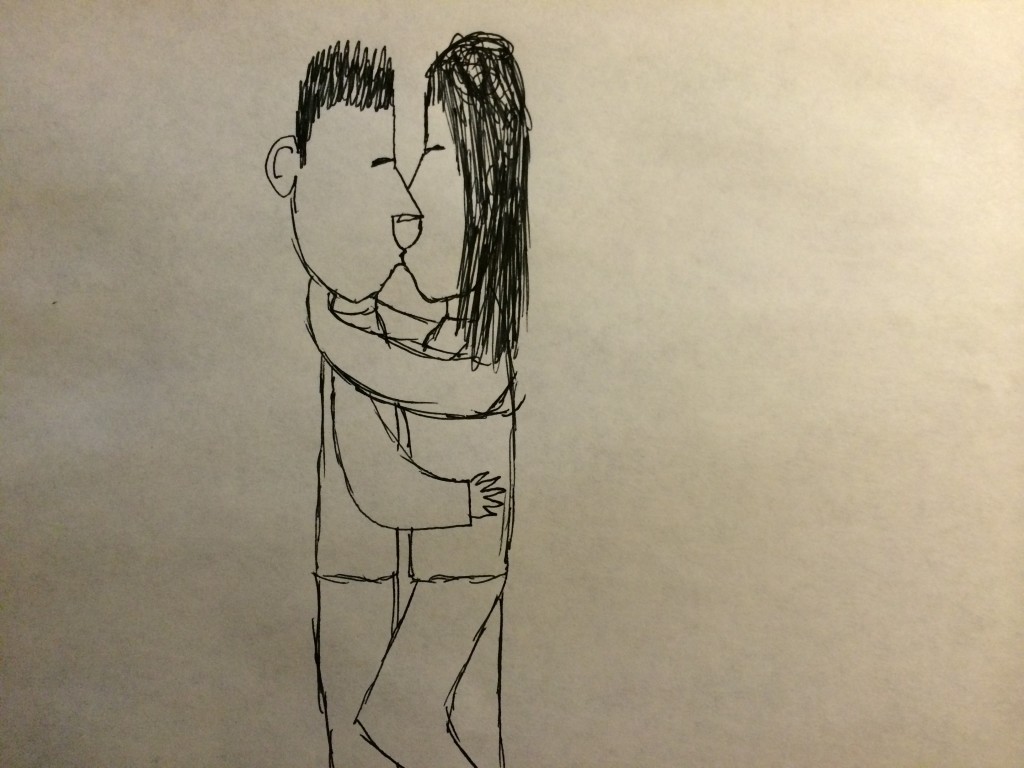 And that would be one hell of a movie, wouldn’t it? Good enough for Paul Thomas Anderson or Martin Scorsese to direct? It might go against their typical genres, but they’d probably be wowed if I pitched this to them, with storyboards and everything.