Christine: Traffic Bollards Could Have Made Things Difficult for The Killer Car

Bollards in Movies > Blog > Christine: Traffic Bollards Could Have Made Things Difficult for The Killer Car

[Spoiler Alert: In case anybody really cares about a run-of-the-mill Stephen King horror film adaptation about a killer car being spoiled]

John Carpenter’s 1983 adaptation of Stephen King’s Christine may not be his magnum opus, as that title will forever sit happily with 1982’s The Thing, but it’s a fairly decent flick about a killer car that literally falls in love with a boy, and vice versa. The two form a weird bio-mechanical bond and wind up going on a vengeful killing spree against everybody who’s ever wronged them and understandably misunderstood their relationship, and there’s of course a lot of driving involved in the murders themselves.

Arnie Falls in Love While Dennis and Leigh Ruin It

Throughout the film, protagonist Arnie Cunningham’s one unlikely friend, a jock named Dennis, and the girl for whom they both compete, Leigh, attempt to wrestle Arnie away from the seductive hunk of metal. The lack of traffic bollards in this movie allows Christine to get away with a lot.

We don’t actually see Christine do much until the second half of the movie, after she’s been magically rebuilt by both unpopular nerd Arnie and herself in Darnell’s garage, but when the murders start to happen, we discover just how absent traffic posts are in this universe. I suspect that’s not exactly a device Stephen King thought much about when writing the novel, either.

The first murder that takes place in the film (post-1958, anyway) is that of chunky bully Moochie, who is basically just a dimwitted John Belushi wannabe, 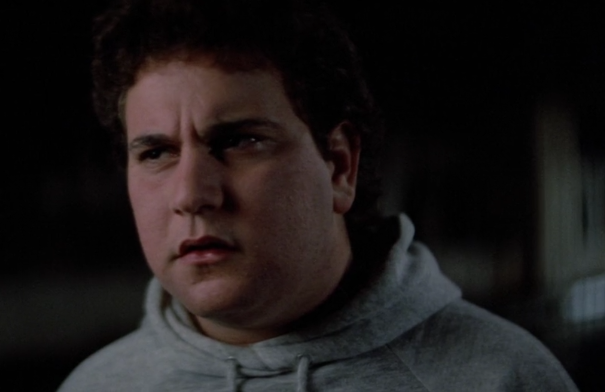 in cahoots with main baddie Buddy, who is basically just a dimwitted John Travolta wannabe. 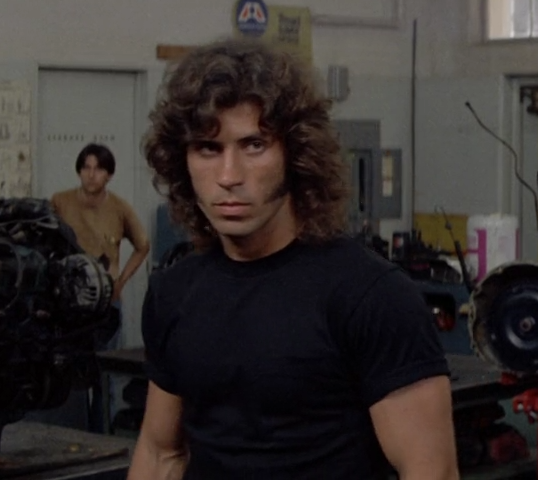 These two cardboard cutout assholes and a couple others decide to get back at Arnie for an earlier bully-foiling incident by destroying Christine. Moochie crosses the line the farthest by taking a complimentary shit on the hood.

Arnie, the sympathetic-nerd-turned-cocky-jackass, doesn’t actually commit any murders directly, leaving the dirty work to the autonomous 1958 Plymouth Fury with a penchant for banal ‘50s rock n’ roll. Moochie hears this music while walking outside one night and probably wonders if he’s stepped into a time machine, but as the vehicle approaches, he comes to the much more plausible conclusion that he’s being chased by a demonic vintage car.

The poor guy doesn’t get too far before his weight gets to him, and he finds himself running amidst some warehouses. There should’ve been some bollards in place preventing the vehicle from maneuvering so easily around the area, 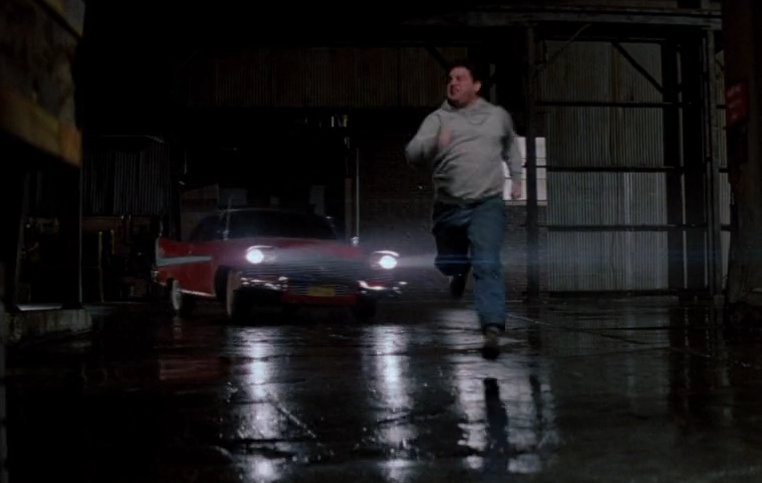 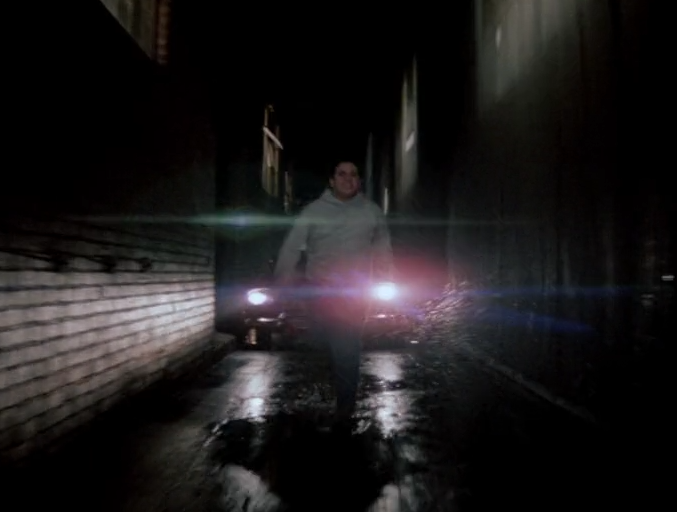 but, for the sake of the plot, there wouldn’t have been as much tension had Christine been blocked off from these places.

Moochie eventually gets trapped in a forklift area. 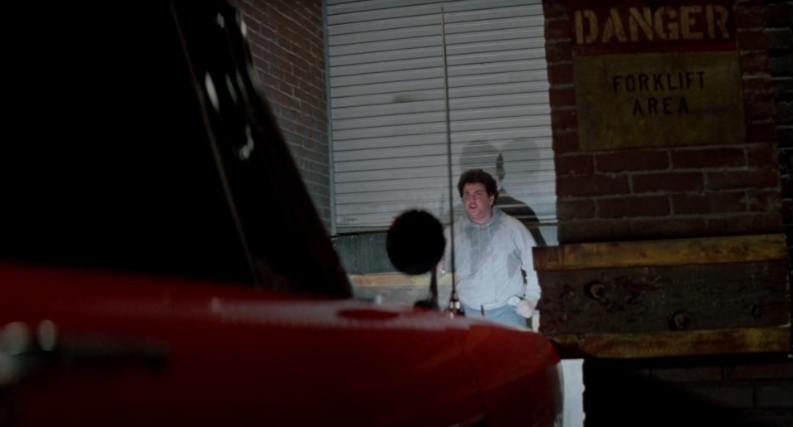 I can only marvel at the fact that removable or collapsible bollards had not been installed in place right there. Imagine if they were:

Christine wouldn’t even have to crash into them (assuming she’s smart enough to realize this), just know that this kid was in a safety zone for the moment. Moochie would’ve been one lucky bastard, though he would have had to crawl over Christine’s hood in order to get around her, and Christine could just back up and pursue him again, but, presumably like any vehicle, Christine would exhaust her gas supply and Moochie could take a nap in the safety of that area until that happened.

Unfortunately for Moochie, this isn’t the situation the writers granted him, and he instead winds up cornered and sliced into two guys with that unfortunate name. Again, I always think he could’ve jumped on the hood and climbed over the top of the car to get away, making Christine have to back out of those close quarters slowly and thus causing more damage to herself, but that’s probably why he was written as being overweight.

Of course, Moochie’s bizarre death is immediately suspected by Detective Rudolph Junkins to have been car-related, and he questions Arnie about his knowledge of the incident. He clearly wonders if the Plymouth’s notorious destruction at the hands of Moochie had anything to do with Moochie’s demise, but Arnie, in full throwback-douche mode as a 1950’s greaser and with a face full of smug arrogance, tries lazily to convince Junkins that he had nothing to do with it.

Junkins states, “The boy was cut in half, Arnie. They had to scoop his legs up with a shovel.” Arnie’s bold remark? “Isn’t that what you’re supposed to do with shit? Scoop it up with a shovel?” Nice job backing your alibi, man. Masterful, really. All psychotic killers should totally follow your lead when questioned. Then nobody would get in trouble.

Miraculously cleared of any evidence linking him to the murder, thanks entirely to Christine’s ability to heal herself better than anything else on earth, Arnie sets Christine on the loose again to continue linking car-related deaths to his own personal encounters with these people, like a total dumbass. Nobody must have told him that clichéd Biblical saying, “pride comes before a fall,” but his friend Dennis should’ve said something to that effect.

Soon, Buddy and his buddy are chased down a lonely road at night, and wind up trapped at a gas station, which Christine winds up crashing into by pushing the guys’ abandoned Camaro, and then blows the place up by causing gas to spill everywhere. She just causes a huge clumsy and avoidable mess.

I bet the installation of traffic posts at key locations would’ve prevented this grisly scene, and maybe would have gotten these guys to tell the police what they needed to know in order to get Arnie some much-needed psychiatric help. But you have to admit, watching one-dimensional bullies get their comeuppance is one of the most satisfying Stephen King tropes.

Here’s how the first guy, Buddy’s friend, could’ve been saved from Christine’s wrath:

Sure, Christine could’ve easily driven around that one, but the nose of the Camaro would be blocked for sure, and the glass behind it would’ve stayed intact, making it just slightly harder for Christine to kill the guy.

As for Buddy’s demise, supposing the gas station still exploded and set Christine on fire, I guess there isn’t much he could do to get away from this on an empty road: 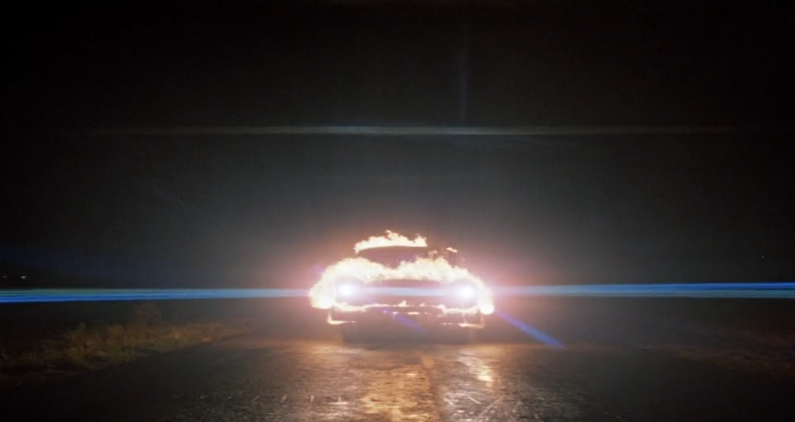 Oh yeah! I suppose he could run off the road and try to get Christine to spin out and lose some traction, but that would make Christine look stupid and incompetent as a killer in opposition of the plot, wouldn’t it?

Anyway, with all of the bullies taken care of, and after Christine kills garage owner Darnell for calling the cops when she pulls into the place to rest for the night, all while covered in steaming burnt paint and metal, there’s only one thing left for Dennis and Leigh to do: finish this vintage bitch off for good.

Arnie and Christine Fight for Their Love

Dennis carves a message on Christine in the high school parking lot telling Arnie to meet at Darnell’s, and of course Arnie and Christine show up together, ready to kill so they can be together forever, never again facing human society’s strange disapproval of their intimacy. I mean, he’s at the point where his passion for Christine has inspired him to make facial expressions like: 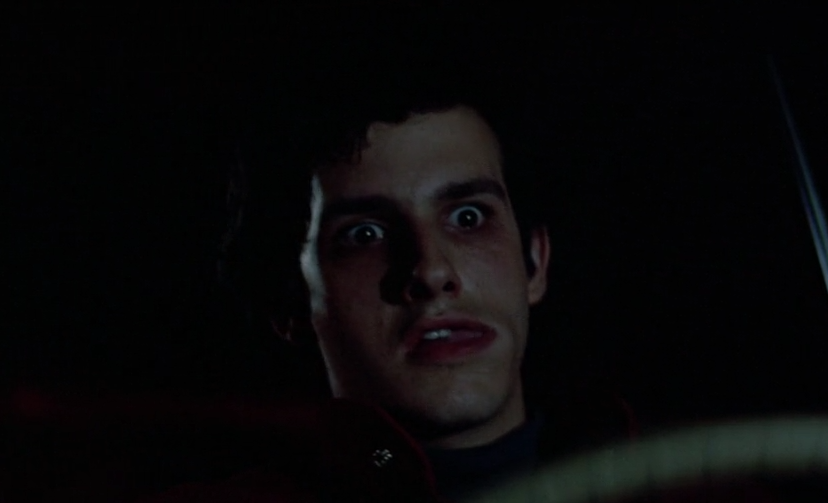 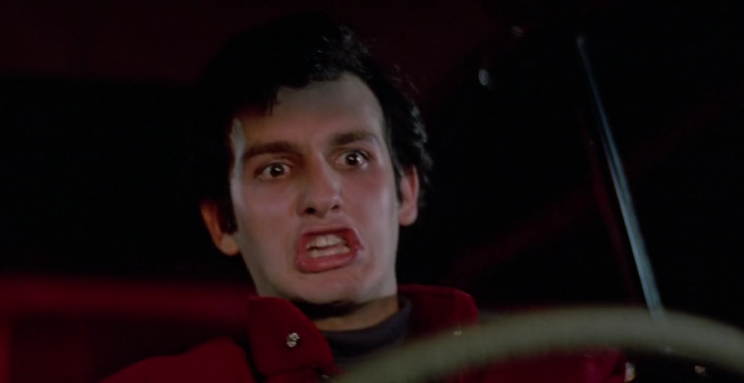 That’s definitely the insanity of pure love right there! And I’m not sure how you literally make love to a car, but I’m glad we never find out how Arnie does that. I’m guessing the tailpipe would be—never mind, not going there.

Moving on, Dennis and Leigh make the decision to use the garage’s resident bulldozer to challenge Christine, whose own ego seems to supersede that of the unpossessed dozer. With Arnie at the wheel, Christine and Dennis in the dozer go head-to-head, and eventually Christine winds up crashing into the little office area to get to Leigh. 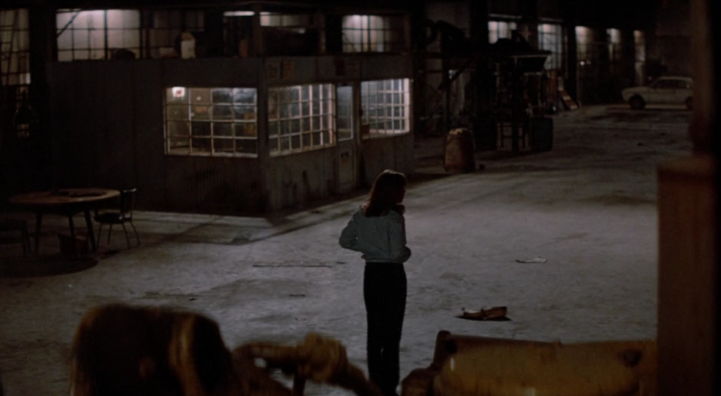 This could easily have been prevented with one or more bollards in place. Darnell should’ve thought about his building’s security, especially with a bulldozer around. It’s just not safe the way it is.

First of all, this would’ve prevented Arnie from dying, as he gets stabbed by glass from the windows and has a masochistic orgasm in the process. Secondly, if traffic bollards were present, Leigh could’ve stayed in that place for an eternity until that car died down, or Arnie and Christine could’ve just gotten frustrated and left. However, why Leigh decided not to stay in the bulldozer with Dennis in the first place is a mystery, but I suppose she had to be out there to make dramatically defiant faces like this at Christine toward the bitter end: 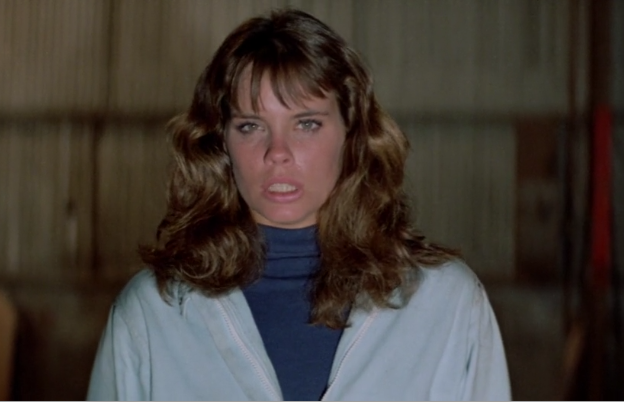 In the end, Christine gets crushed, turned into a cute little cube of condensed parts, and twitches a part of itself as Dennis and Leigh walk away from the compactor, serving as a typical cliffhanger.

Clearly, Christine could run free throughout the film, all because of a lack of traffic post installation in this universe. If they had been around, I doubt any of the murders would have happened, especially if these characters were as aware of these devices’ usefulness in this situation as I would have been. A killer car can only do so much, healing and seduction powers or no healing and seduction powers.

Maybe I should write a letter to Stephen King about traffic bollard awareness. I’m sure he’d think I was perfectly sane. Perhaps he might even concoct a story about sentient bollards that move around and prevent all cars from going anywhere, conspiring to keep the human race immobile forever. Now that would be a story. For more information about traffic control posts, check out what are bollards here.