Bollards in Love: Another Original Film Concept from Bollards in Movies

One thing about bollards is that they’re always seemingly isolated. They may stand in proximity to each other, but do they ever converse, or ever actually fall in love with one another?

Maybe not, because they’re inanimate objects, but imagine a world where bollards not only have brains, but they also have feelings: loneliness, anger, happiness and love, among others like depression and anxiety.

This imaginary film, Bollards in Love, imagines that bollards can experience romance, of all things.

They have the ability to maintain complicated relationships while remaining relatively stationery, observing many of the same people in the exact same environment day in and day out.

But through their simple existence, they have each other to overcome their boredom.

This is a story that’s mainly about love, of course, but it’s also about jealousy, tragedy, and ultimately the pains of being an immortal traffic safety post. 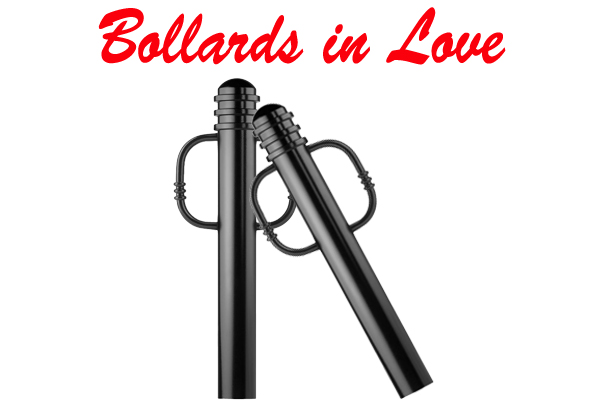 Patrick, Karen and David are three traffic bollards who have stood guard out in front of a deli for about a year. Patrick sits on the far right, Karen in the center, and David on the far left from this perspective, although these orientations are meaningless to them. 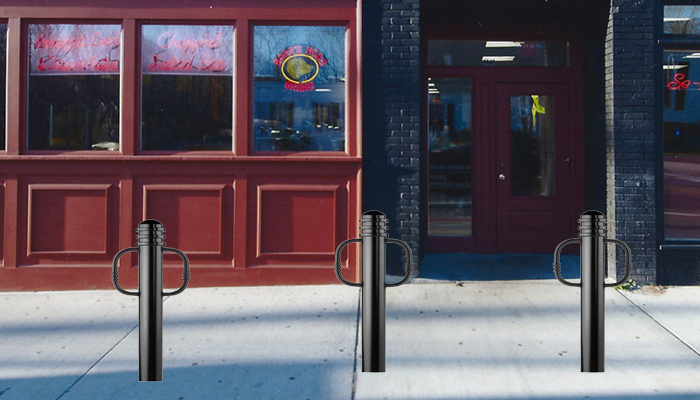 They don’t understand exactly why they’re there, or why they cannot move at all, or why they can’t speak with mouths like the pedestrians who pass them every day. However, as time has passed they’ve had time to think and observe.

They can inexplicably see without any true eyes, and can look in all 360 degrees around them, in every direction.

Yes, they can even look inside themselves, where inexplicable hearts sit beating within their cylindrical metal chambers.

The bollards can communicate telepathically with each other, but nobody else—human or animal. Patrick has a defined deep male voice, Karen has a defined light female voice, and David has an androgynous voice that neither Patrick nor Karen can pinpoint as male or female.

They assume he’s male, based on the name David has chosen for himself. When asked what gender he identifies with, David simply replies with “meh,” which doesn’t help.

Over the past year since their installation, David and Karen have grown closer. Not physically, of course, because they’re bollards firmly locked into the ground, not having realize they’re removable traffic posts, but they have managed to form an emotional bond as the year has progressed.

They talk with each other, laugh, point out observations they make regarding their environment, and flirt. David, on the other hand, sits silent, seeming to simply take in his (or her) own observations.

One day Patrick watched as a McDonald’s was being built directly across the street from them. While the construction had been going on for two months, today was when he spotted construction workers installing three bollards in the distance.

They were different from Patrick, Karen and David, appearing wider and bright yellow, while he and the other two were sleek and black, with handles for bicycles (although these were never used).

Patrick attempted to communicate with them, but they didn’t respond after he sent his mental greeting of “Hello.”

“Look at them across the street,” Patrick said to Karen.

Karen looked out and said, “I know. I can’t seem to get them to say anything.”

Karen turned her gaze to David and asked, “Can you communicate with those guys over there?”

He saw them and tried, replying, “No.”

“Why do you think they put us here?” Patrick asked Karen.

“They’re sitting in front of a business like us, lined up.”

“Maybe they put us here to keep the building safe from all of these moving boxes that pass us.”

“That’s what I’ve started to wonder, but they’ve never crashed into us, or any other wall around us.”

“Maybe it’s because we look nice.”

“I like that idea.” Patrick added with a softness in his voice, “And it’s certainly true. You do look nice.”

Karen laughed, embarrassed, and blushed invisibly beneath her black exterior. 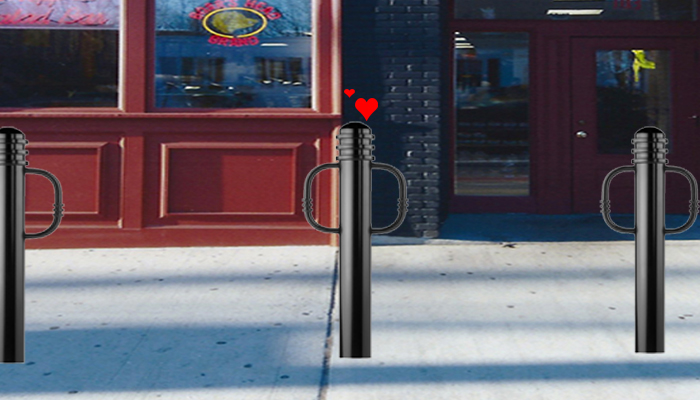 As night fell, and the beautiful mixture of oranges, pinks and reds painted the sky, Patrick looked down the street where the orange globe began to lie down in the distance, and said to Karen, “Just look at that sun.”

Karen released a relaxed sigh, looking at both the sunset and Patrick who stood against it.

“Such a beautiful sight,” Karen whispered.

Patrick turned to Karen, took in her beautiful figure and whispered back, “Yes, it is.”

Patrick wanted to move in closer to Karen, and struggled to release himself from his restraints. He attempted until nightfall came and the orange of the sky became the synthetic orange glare of the streetlight above them.

Alas, he couldn’t free himself through all his desires to be nearer to Karen. He wept quietly so Karen couldn’t hear, and thankfully no tears came out to expose his sadness. Karen sobbed silently as well, aware of Patrick’s need for her, hoping it was as strong as her need for him.

Meanwhile, David also cried, but not out of desire. Instead, he cried out of loneliness, of pain that only grew with every passing day. His pain went ignored by the other two, as well as his entire presence.

The streetlight above only provided light for Patrick and Karen, casting him in shadow to make matters worse, illuminating Karen and Patrick while leaving him in complete solitude through every night.

The reason he didn’t talk was because he no longer desired to exist. He no longer saw any point. Karen never expressed interest, and there wasn’t another bollard around him to—

Sorry, I now realize this is getting dark and a bit too long. I’ll skip a day to the part where Patrick and Karen actually manage to get together. 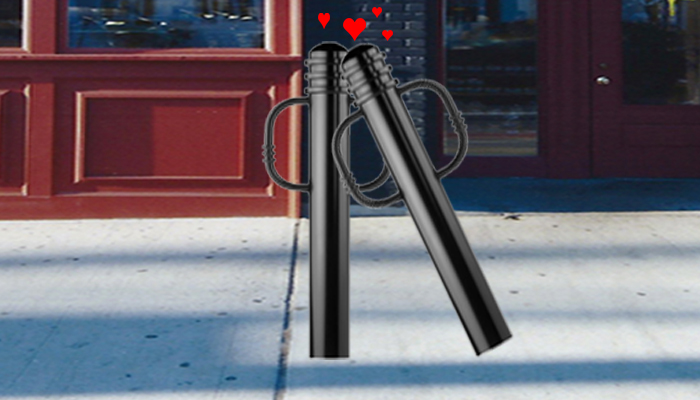 Patrick had finally done it! He broke free from the lock that had pulled him down for so long, managing to break it with sheer willpower. He moved in for the kiss, toppling over and leaning against her so they could rest with each other. His head had managed to fall between Karen’s head and her bike rack shoulder, essentially necking her. They cherished each other’s touch, hearts beating faster than ever before, and realized that it was likely that no other traffic bollards in the history of the universe had managed to become that intimate, to experience the wonder of another’s touch. They could finally be happy.

David in the meantime cried, this time audibly, directing his voice to both Patrick and Karen, but neither of them heard him, still embracing each other as tightly as they could without arms. People passed by and flashed weird gazes at Patrick and Karen, but nobody paid poor David any attention. He was but a eunuch intended to live in the shadows both day and night. It was at that moment that he decided to stop his heart from beating. Through that same power of will that brought Patrick and Karen together, David slowed his heart until he couldn’t hear it thump and echo from within. Blackness—the same blackness that consumed him externally—had permeated throughout his cold stainless steel body, giving him the release he needed. Because there was no physical change, Patrick and Karen didn’t notice anything different. They didn’t say anything to each other either, merely basking in their love as the day went by.

A Beautiful Bollard Love Broken Up

When the deli closed in the evening, the manager of the building walked out and saw Patrick tipped over and removed from his ground sleeve. Confused and wondering if somebody had tampered with the traffic post, the man looked around for a possible culprit. He then grabbed Patrick, who at once began screaming as loud as possible.

Karen, starting to sob once again, cried, “Patrick! Patrick come back to me, my love!”

The manager locked Patrick back into place as Patrick futilely protested, “You bastard! You heartless bastard! Noooooo!” Patrick shuttered at the final bang of the lock as he was twisted back into place. He fell silent in his defeat.

The manager walked to his car as he left the bollards to cry, no longer able to physically express their love.

“He will never keep us apart,” Patrick vowed. Once again, he mustered enough energy to pick the locks withholding his passion, and lunged toward Karen. However, he exerted too much energy this time and fell beside her on the sidewalk. 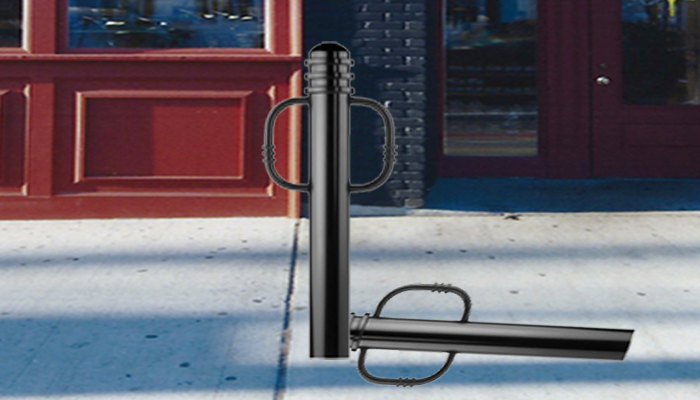 He couldn’t lift himself up, but he rolled toward the foot of Karen, and said, “I will never let them separate us, even if we have to do this every day until they glue me down. And even if they do that, I will always be here with you, and that’s all that matters, my bollard babe.”

Sure enough, when the manager returned that morning to open the deli, he found Patrick lying on the ground against Karen, firmly sitting him back in his lock, and once again Patrick freed himself as soon as the man went inside. Eventually, cement was added at Patrick, Karen and David’s bases to keep them in place on a permanent basis, even though David was a dead shell with no desires for anything anymore.

Patrick and Karen lived bittersweetly ever after.

I think I really should write a screenplay for this. I’m sure some Hollywood hotshot would option it in a heartbeat. What do you think? Do you still wonder what is a bollard? Share our posts online.